Other than the historical interest, how can the routing information be used on a model railroad?
If you are using more prototypical waybills, then the routing information is included on those. But I also think it's useful for building trains that will be running on the layout, as I've noted before.
This is a Freight Interchange Report for the New Haven, 1929. I don't recall where I got this, but it's interesting in that it shows how many cars were received at each interchange over the course of a year. 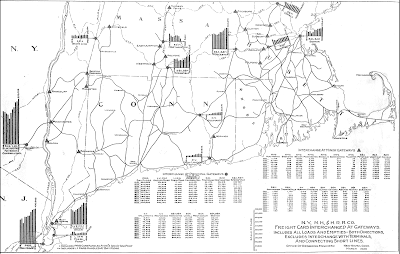 The map includes the traffic from 1918 through 1929, here's the list for 1929, arranged by road and interchange since it's the closest to my era.

The top 5 Interchange Points account for 77% of the traffic on the NH:

Add in two other roads that aren't represented yet, the CV at Willimantic and New London (3% each); and the LIRR at Fresh Pond (1%) and you have 84% of the traffic, covering all of the Class I roads that interchange directly with the NH.
What about the other 16%? We know that many interchanges were used for local traffic only. For example the B&M at Northampton, or B&A at Westfield, generally handled traffic for the Canal Line north of Plainville. This is true of almost all of the other interchanges.

As we've learned, the Interchange Points that handle traffic bound for New Britain are all of the top 5, plus Willimantic and New London. Obviously not all traffic that came through these points are bound for New Britain. But the percentages can help set a baseline for determining how much traffic is on each train.
If we only consider interchange points that have published routes to New Britain, the percentages are:
We could adjust the numbers for Bay Ridge and Harlem River by attempting to remove coal. It's my understanding that only coal for destinations along the west end of the Shoreline and NYC came by car float, and the rest was routed via Maybrook. Based on the 1950-54 numbers, coal accounted for about 15% of all traffic. Remove 15% of the cars from Bay Ridge and Harlem River and the numbers change slightly.
We also have to consider routing within the New Haven, because many of these are consolidated at Cedar Hill or Hartford.
Note that Maybrook traffic was run via Cedar Hill in 1949, 1950 and 1954 in my era, so that mix is:

So how do we assign this to trains?
To make the math simple, we'll say 100 cars will move through these interchanges.
In 1948 there are the following in-bound trains that will be staged:
EA-2 is an unusual case, handling traffic for Waterbury, New Britain and Hartford from Bay Ridge, Harlem River, and Maybrook via Bridgeport. It connects from primarily from GN-4, plus OE-2 and NO-21 and I believe is largely LCL traffic since it's the reverse move of ANE-1, part of the Speed Witch. So we can shift cuts to that train as well (this it the last year it ran).
These are blocks bound for New Britain, though, which means the trains will have cars bound for other destinations too. Those are some long trains in HO scale. I think for my prior ops sessions we moved about half that. so:
That looks more manageable, although the NY/YN freights will still be large. But we can move a portion of that to EA-2, or three 9-car blocks.
In my case, though, we're modeling the day job. So all of these trains, except NY-4 and HDX-5 run overnight. They are staged as cuts left for the crew to work.
NY-4 is a maximum 14 car train due to my staging, but it was also the Canal Line (North) local, so I expect that more traffic for New Britain would be on NY-2, so we can shift 4 cars back to that.
So there would be two Maybrook cuts on Track 5 in New Britain (8 and 9 cars), plus EA-2, another 11 cars also on track 5, for a total of 28 cars.
A Cedar Hill cut of 11 cars will be waiting on Track 6 at Whiting Street Yard.
During the session, 5 cars will be dropped at Whiting St by NY-4, and 7 cars from Hartford on HDX-5 on Track No. 5 in New Britain Yard.
In '49. '50 or '54 where there are no Maybrook freights, the traffic is quite different, since it moves an additional 28 cars to NY-2 and NY-4. Since I have limits on the length of NY-4, most of these would be left as a cut overnight from NY-2. However, the Maybrook freights were dropped because of a decrease in traffic, so it would be reasonable to reduce the overall session to, say, 30 cars.
In this case, the session starts with the majority of inbound cars, two-thirds of them. None of these are up at New Britain Yard until HDX-5 comes through. So the feel of ops sessions in these years will be distinctly different.

What About Another Location?

We could use this to look at another location, such as Chris' Valley Line. The Valley Local originates in Hartford, the Air Line Local in Cedar Hill, and then there are the two Shoreline Locals, one from Cedar Hill and one from New London.
The most interesting thing here is that all of the cars that route through Cedar Hill bound for the Valley Line north of Middletown will come from the Air Line Local. In addition, since Saybrook is between New London and Cedar Hill, cars hauled by the CV would not go through Cedar Hill like they would in New Britain.
One can also see that for years where there is no Maybrook-Hartford freight (1949, 1950, 1954+) that the Valley Local would likely be shorter leaving Hartford, and receive more cars from the Air Line local.
Posted by Randy at 11:58 AM