My favorite issues of Along the Line have a short article focusing on an industry somewhere on the line. 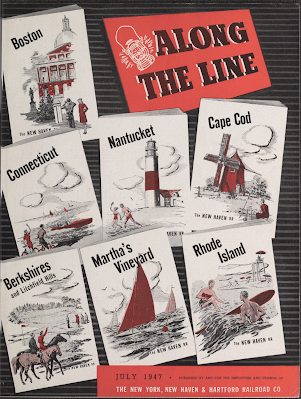 In this issue, the featured industry is Landers, Frary & Clark in New Britain. Unfortunately, this article is a little light on the details I'm looking for, such as inbound materials ("The New Britain company uses an amazing variety of raw materials to manufacture its products, and ships out a diversified assortment of finished goods." 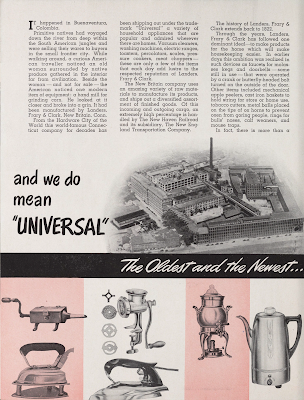 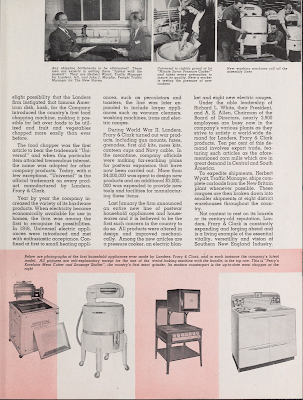 It does go into a bit more detail about many products they have made, "...faucets for molasses kegs and doorbells - some still in use - that were operated by a crank or butterfly-headed bolt turned on the outside of the door. Other items included mechanical apple peelers, cast iron baskets to hold string for store or home use, tobacco cutters, metal balls placed on the tops of ox horns to prevent oxen from goring people, rings for bulls' noses, calf weaners, and mouse traps."

They invented the first food chopper (Perry's Excelsior Meat Cutter and Sausage Stuffer), which also was the first product in their Universal line of household goods. They were among the first to produce electric appliances such as percolators and toasters, but by my era it includes vacuum cleaners, washing machines, irons and electric ranges. Postwar additions included a pressure cooker, electric blanket, and new ranges.

It does note that they ship carloads whenever possible, to eight district warehouses throughout the country. Unfortunately it doesn't state where these are so I'm doing a little digging to see if I can figure that out for waybills.

On the layout, of course, Landers, Frary & Clark is a dominating industry. The main factory on Commercial Street is adjacent to New Britain Yard and across from the station. It will be 4 to 4 1/2 feet long, which is how long the mock up is thanks to Dick. Although there were several tracks inside the factory complex, I had to settle for one hidden track. I am not aware of how they moved cars once dropped, if they did at all.

A second complex runs along the entire length of Whiting St Yard as well. In fact, it extends beyond the yard, with a pedestrian bridge across Ellis St. The southern part won't be on the layout, since the Ellis St bridge is the view block ending the scene. New Britain native Ed O'Keefe told me that they received materials and manufactured parts at the Commercial St campus, then trucked the materials across town to be assembled and shipped from the Whiting St factory.

Although the Commercial St buildings were leveled prior to the construction of Rt. 72, the Whiting St complex is still there. I haven't looked into its current use.

This column discusses shipping explosives, noting that this includes things like gasoline, alcohol, fireworks, matches, wet storage batteries, paints and varnishes, cleaning fluids, insecticides, and other commodities. It also mentions other hazardous chemicals, such as sulfuric acid and potassium cyanide, plus explosives such as black powder, blasting caps and dynamite.

How much of this would affect operations in New Britain? Quite a bit actually. Ensign-Bickford had factories in Avon and Simsbury, both on the Canal Line north of Plainville. They manufactured fuses (for explosives, not the electrical circuit type) and were the inventors of Primacord. Both raw materials and finished products would move under the explosive rules. I covered these rules in this post. These would be on HDX-5 or the YN/NY freights, which wouldn't be switched out at New Britain. But proper placement and handling of the cars must be followed when switching out other cars, and will also require different waybills.

They Do the Darndest Things 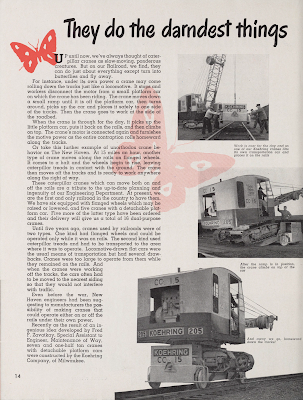 A one-page article about a new Koehring caterpillar crane. The reason for the article is because it uses a small platform car, that it can power by a small motor. When it reaches its work destination, it can crawl off the platform, then lift it off the tracks to move it out of the way. The other crawler cranes rode on flat cars, and the car had to be moved to a location that was out of the way.

The article states that they believe they are the only railroad in the company that has them. The NH has 5 that have flanged wheels that can be raised and lowered, and five with the platform cars, with five more on the way.

I find this quite interesting since I've never seen a reference to these 16 cranes elsewhere, nor have I seen photos.

Email ThisBlogThis!Share to TwitterShare to FacebookShare to Pinterest
Labels: Along the Line