I started this post in June of 2019...Yep. Another flat car project.
The Intermountain AAR 70-ton flat cars are really well done models of an important prototype (including a New Haven one), and I have several of them. The only issue I have with them is that the laser-cut wood decking is a bit too thick, and tends to delaminate and curl. One option is to thin out the deck and glue it better. But I also wanted to experiment with doing a board by board deck, which should be a simple enough project with this model.
Despite the decking curling at the ends, it takes a bit of work to remove. It's installed using double-sided tape. I peeled them off, then scraped off any tape that was left.

I didn't have any 2" x 6" styrene strips at the time, so I started with the wood strips I had handy. I used my always on-hand Aileen's Tacky Glue to glue them in place. 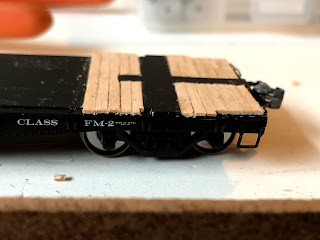 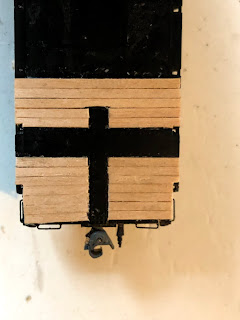 This process was working OK, but I have found that I really prefer working with styrene. In addition, the laser cut deck has boards of several different widths. I tried to find some prototype diagrams or information that would verify this, but I haven't been able to do so. So I decided to go with Intermountain's research and replicate that.
I built a simple jig to help keep things aligned using a couple of pieces of Masonite glued to a Masonite base. I have some passenger cars to scratchbuild/kitbash and this was built to prepare for that (coming soon!).
I found that I needed to do a few pieces then glue them, otherwise they wouldn't stay in position for long. As you can see, I built them alongside the Intermountain deck after cutting all of the pieces using the Chopper. 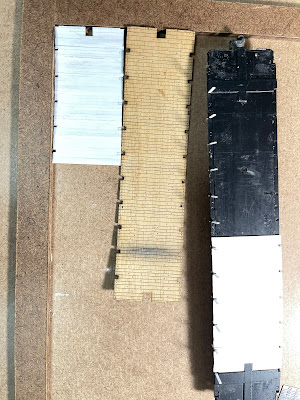 I also ended up building it in two halves (unintentionally, actually, but found that it let me file to fit around the bolster and figure out what width the final piece needed to be). I also installed stakes in the stake pockets on one side, to help in alignment and trimming the stake pocket slots. 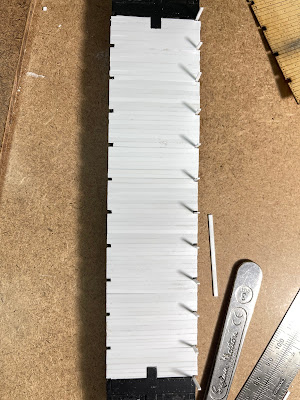 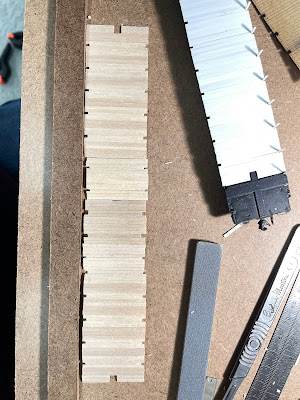 I did finish the wood deck as well, even though I may not use it. I also made the end pieces, but I haven't cut out the curved area for the drop brake wheel or the deck stake pockets yet. I also didn't make nail holes yet. Instead, I'm going to have a friend make some castings. I'll modify the castings to make a final master to make several, since I'll need a few. If they come out well, In the meantime, I have a few more that need to have their decks removed.
Posted by Randy at 9:12 PM