I've exhausted my stash of Tichy flats, so I just need to finish the ones I've started. In the meantime, I have come across a few additional prototypes if you're inclined. Most of these cars on any road were retired quickly post WWII, but I'm sure a lot ended up in MOW service. For those modeling the depression era and earlier, they would be worth considering.

Most of the NYC flat cars are similar to the USRA design, with fishbelly side sills and a straight center sill. But this series of 41' cars closely resemble the Tichy cars. They have 11 stake pockets. Here's a picture that looks like it's one of these cars.

I don't have a picture, but the diagram is quite similar. The biggest difference is that it's listed as a wooden flat car. Some received steel underframes c1924-6. I believe the originally had truss rods, but that would be doable. 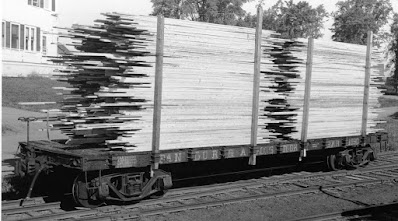 Ray Breyer recently posted this on the Pre-Depression Era modeling group on Facebook. Like the NYC car it has 11 stake pockets per side. I think this is the 71700-72099 series of cars. Best I can tell, this was the only class with a steel underframe. The deck was 40', over the end 41'.

The others had steel center sills and truss rods. For example this one, also from Ray:

I don't have the dimensions, but it would be just as easy to scratch build these side and end sills with a straight center sill and the addition of truss rods. The slight "fishbelly" side sill is interesting on this prototype.

I won't be digging up the many truss rod cars, as they would almost certainly be out of service by my era, but essentially this design appears to have largely been a transitional one. It starts with shorter flat cars with straight center sills and truss rods. The next evolution was steel underframes with deep fishbelly center sills (even at the high angle, the center sill is visible in the photo of the NYC one). They appear to have been largely supplanted by the USRA design, but a few more were built into the mid-20's and had less substantial center sills.