Dick and to a lesser degree I, among others, have been helping Greg design and build his layout. The space is relatively small, and complicated by the location of the mechanicals in the room.

Greg has built the Milwaukee Everett St. Station and train sheds (they look awesome) and owns four different versions of the Hiawatha, so that is a big part of the layout, but also wants to include New Lisbon, WI, which is somewhere between 150 and 200 miles away. He'd also like to be able to have some sort of operations so he can have folks over to run it.

It sounds like a very interesting concept for a layout.

He has a roughly 22' by 14' room to work with. However, the mechanicals are located in a position that means the main portion of the layout really has 11' by 14' to work with. While we can fit some things around the mechanicals, it greatly limits options. Oh, and it has to be single level with continuous running.

For a prototype-focused modeler like me, this is a challenge to wrap my head around, and from a layout design perspective a seemingly impossible task in the space and restrictions given.

When starting from scratch, my approach is usually to sketch out how to maximize the benchwork in the room. I start with a minimum 30" aisles, and assume up to 30" deep benchwork and start from there. It just helps me visualize where we can actually put track.

I did some early sketches to see what we could do with a helix. Although I'd prefer to see the trains as much as possible, I am a fan of a using helix to create distance between scenes where it makes sense, and it certainly would make sense here. Dick even drew one up with a helix around the mechanicals. But Greg wants to keep it to a single level, so those are out.

In this case, there isn't enough room for a peninsula with a loop, so it's pretty much a rectangle around the main part of the room.

The next thing to consider is where the desired key scenes will fit on that benchwork. Greg had already worked out a concept with the Everett St. Station against the 14' foot back (south) wall, which is logical. He hopes to have some industry to operate, and then back across the room with something representing New Lisbon. 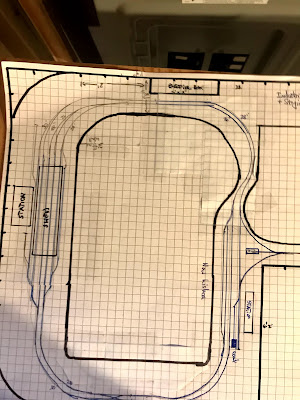 Although not the best picture of it, this is one of Greg's sketches. The rectangle at the top is the electrical box. Dick designed a swing out here to allow access, and benchwork has been built along the three walls so far. The rectangle in the lower right corner is where the mechanicals are located.

The S-curve between the electrical box and New Lisbon also happens to be where a lift-up/out or some other approach to provide access is needed. This doesn't show any sort of staging at this point, although there is room along both sides of the room off to the right.

The wye is going to be the biggest challenge, and I don't trust my drawing/math to know that I can get it right on paper. So we mocked up the wye with the Peco turnouts he's using, and 24" radius for the legs since we can't reasonably go any tighter than that. The goal would be greater. I have a few pieces of 24" sectional track that I use for mockups like this so I know that we are working with a true radius rather than an unintentionally optimistic one that I bend from flex track.

But the other thing that I'm always mulling over is how the layout will be operated. This is partially a question of the movement of trains, but also where the operators will be, how they'll move through the space, and how best to maintain the illusion of a real railroad, rather than one just built in your basement.

There is an important question that I find is often forgotten as we design a layout:

What will the operators do while operating?

We often focus on the track arrangement, and maybe the specific trains, and even ensuring you have space (wide enough aisles) for people, but we often don't think about what those people will be doing for 3-4 hours or more.

I think most of us are used to the approach of following the train for ops sessions nowadays. Each operator/crew is assigned a train, runs it through its job, and then takes another train out if there's time. Chris' Valley and Air Line locals are great examples of this.

My layout, on the other hand, is more of a switching layout. Yes, there are through trains, but they are on the layout for only a few minutes as they come up from staging, stop at the station (or drop off/pick up a cut of cars), and then go right back to staging.

Chris had to contend with that very question after the fact, like so many of us do.

Both Valley and the Air Line locals both occupy a crew for a full session. But there's another local that serves two industries in Saybrook, plus interchanges cars with the south end Valley Local. That only occupies a crew for an hour at most. What would that crew do for the rest of the time?

But by adding in the heavy passenger and through freight traffic, another crew (split between the two staging yards) are also busy for an entire session and can handle that short switching job.

For Greg's layout, the answer for me was a 1941 Trains article on the amount of activity in New Lisbon that Greg had. It covers less than two hours of (very) busy activity, but I later found some timetables to verify that there would be a good amount of activity during the entire session.

The article about New Lisbon details how two through freights both stop in town, uncouple from their cut of cars to get coal and water, and then move their cuts into a siding to wait.

In addition, two passenger trains also come into town, get coal and water, and then back into two stub sidings and wait.

Two Hiawatha trains (100 and 101) then come into town, make their station stop, get coal and water, and then continue. The other four waiting trains then start to go on their way.

In other words, it's a perfect arrangement for a railfan style layout similar to Chris' Saybrook scene where the trains enter from and exit to staging, and the operators are in a single location handling the movements of all of the trains. The Everett St Station scene also lends itself to this sort of operations, with lots of passenger (and freight) passing through, and a little passenger switching.

The connecting track between the two, when scenicked, can act as hidden staging to supplement additional staging. A train leaving New Lisbon can pull out of the scene and stop, and at some later point the Milwaukee crew acquires it and pulls it into the station.

By moving New Lisbon to the other side of the mechanicals, it also gives us room to build an industrial area on the west end of Milwaukee.

This all goes back to answer the question too - what will the operators do?

Both of these jobs are full session jobs.

Now we've got something to work with. Six crew members, all working in their own independent physical spaces, all with full session jobs. The distance between New Lisbon and Milwaukee feels prototypical, since you don't follow a train from one to another. In fact, the New Lisbon crew won't have any direct observation of what's going on in Milwaukee or vise versa. Other than keeping train lengths down, the scenes can be built and operated fairly prototypically and should be recognizable to anybody that knows the locations.

So I sketched up New Lisbon and while it will be tight with a few compromises, it will fit. The turnouts/crossovers may not be in those exact locations, but I tried to keep all of the important tracks for operational purposes. 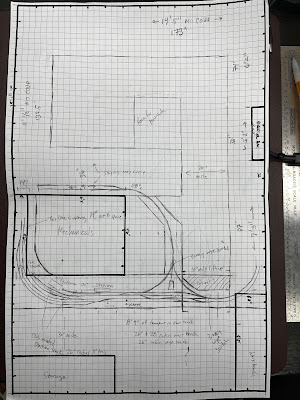 Note that this is rotated 90 degrees to the right from the prior photo. The lift up/out will be a simple rectangular piece. Additional staging can be built to be semi-hidden on the left side of the Milwaukee and New Lisbon scenes, and also on the right hand side if needed. There will be a slight grade down to New Lisbon, and a grade up to the industrial area to allow the staging on the north end of the wye to go under that section to be hidden.

This uses 26" and 28" radii for the main tracks, and although they won't be exactly parallel, also for the station stub tracks where they will need to curve. In addition, the legs of the wye are 26" radius.

As you can see, the wye ends up about 30" away from the mechanicals, but anything else eliminates any possibility of modeling the station area itself, and to maintain the radii prevents it from moving any further to the right. All sidings, stub tracks, and staging tracks are at least 3 feet (one piece of flex track) long. That's quite short for passenger trains, but it's about the best we can do here. The only thing that's really missing is the dead straight trackage through town, and that's just unavoidable in this space.

The New Lisbon scene is a good example of how the track layout is crucial if you want to replicate the prototypical operations. With six trains meeting at the same location, and all getting coal and water while making their stops, you have to have at least four tracks long enough to move trains off of the main. Fortunately, two of them were stub tracks, which adds interest since you need to back passenger trains into both of them. There is a coaling tower at each end of town, one of which was built specifically for the westbound Hiawatha.

The Everett St. scene is at the top of the page (not drawn, obviously), and the peninsula in the middle will be an industrial location with lots of work.

This is just a sketch and recommendation, and as it's Greg's layout things may very well change as we help build it. But I'm pretty confident that this is the best (only?) way to fit New Lisbon into this space and we can ensure that he's able to model both of the key scenes that he'd like plus meet his goal of being able to have folks over to operate too.