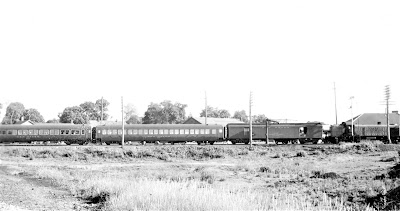 This is DERS-2B 9RS-2) 0509 with a westbound passenger train at Plainville, June 16-1949. Another Kent Cochrane photo, of course. The photo states there are 4 passenger cars, although only three are visible. One of the wooden heavyweight baggage cars, of course.

What's interesting is that the two Pullman-Bradley lightweight coaches are the 10-window version, and not the 11-window commuter coach version. One has the skirting in front of the wheels removed, the other one does not.

Both are in the original Hunter Green with aluminum window frames and the New Haven lettered under the windows. They aren't smokers since there aren't script heralds above the trucks. It would have been highly unlikely since there were only 4 lightweight smokers until 26 more were converted in October of 1949.

Although I have a couple of pictures of DERS-2b (RS-2) locomotives on passenger trains on the Highland, I don't have any assignments for that service. 0509 didn't have ATS equipment, so it couldn't have run on the Springfield line. I probably won't be modeling another RS-2, but I do have a photo of 0510 in passenger service on the line.