Thanks to Dick's suggestion, I've recently had Virtual Railfan running while working on other things on the computer, and it's amazing on how long the trains have gotten. One in Tucson was 3 locomotives, two more mid-train, and I counted 277 cars. All double-stacks.

While I wouldn't expect anybody to model a train that long, it did remind me of some conversations we've had over train length over the years. The gist is usually that once a model train gets to about 20 cars or more, it "feels" longer. We've got evidence that local freights in my era could be 20 cars fairly regularly, and on many models that's a through freight.

Not all of the trains I'm seeing are that long of course, but there are a few other factors that I think come into play when trying to determine how long of a train on the model is "good enough." 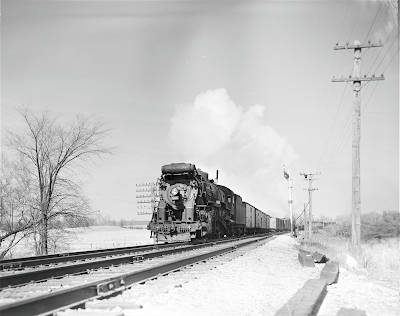 L-1 3206 westbound with AO-3 at signal 89.8 in Newington c1946 (Kent Cochrane).
In my case, some of my trains will be limited by the layout itself. For example, the Holyoke freights from Cedar Hill have to deal with a 19-car (if I recall) staging track. As it turns out, the train is NY-4, and later in the day has to receive YN-3, both of which are actually the local for the Canal Line and north. It usually services Meriden and Berlin before reaching New Britain. As I've been researching, it appears photos seem to indicate that a 12 to 20 car train is appropriate in my era. As a symbol (through) freight, I originally thought these would be much longer, but it really functions as a local freight.
Going back to the steam era, AO-3 is the usual daytime Maybrook freight. This train is the longest train that will run on the layout. I can build a very long train in staging, even 116 cars as at least one train was noted by Tom McNamara on the back of a Cochrane photo. The limitation, though, will be how many cars I can get up the helix.
That 116 car train with an L-1 did have an R-1-b a cut in a dozen cars back, so that will help. But I probably still won't get 116 cars. The DER-2 (Alco FA-1/FB-1) locomotives were delivered in 1947, though. Which means that I won't need steam for very long on this run, even though I have pictures as late as 1947 using an L-1, they were assigned the DER-2s.

When watching the train go by, it wasn't so much the length that caught my attention, but how long it took to pass. While a 20 car train on most model railroads might look like a long it doesn't feel like one. Fortunately, for the years I model, the DER-2 (FA-1/FB-1) locomotives were in use and a set of three or four will definitely handle a very long train up the helix. I'll also have the advantage of using a fast clock. If I decide to run, say, a 40-car train at 15 mph, not only will it take a long time to pass in front of us, but it will take 4 times longer by the clock. So that helps.

The most visible factor may be the consist. In the modern era it's actually easier to shorten a train and still look prototypical, provided the train is all double-stacks, or covered hoppers, or a unit coal train, etc.
The issue I've always had is trying to match photos from my era. Through freights often have a cut of reefers at the front. If this is substantial, perhaps 10-12 cars, a 20 car freight no longer looks right. But if you cut a train by 80% and cut the number of reefers by the same amount, then you get one or two at most, and you lose the feel of a block of reefers.
The picture above is much more workable, as there are only four reefers at the front. In the visible portion of the train after that it's a flat car,  5 house cars (mostly box, but one looks like a reefer), then two gondolas, three more box cars, maybe another gondola, then more box cars.
The trick is trying to maintain what looks like a good mix, within the limits of what's possible on your layout. But I'm coming to the conclusion that for the Maybrook freights I am now leaning toward much longer trains than I originally considered. It will take some experimentation, but I'll see what I can do.
I did do a test ten years ago (!) with a 30 car train that you can see on YouTube. Look at the old mockup for the east side industries entirely inside the top level of the helix. There's a video in the helix as well.

That's a 30 car train and definitely wasn't the maximum that the FAs could handle up the helix, so I think once I get the decoders in those locomotives I'll test a 50 car train and see how that looks going through the center of town.