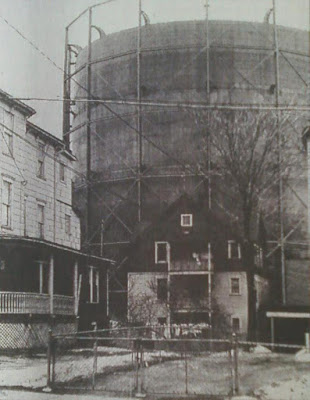 One of the major industries I'm looking forward to building is the New Britain Gas Light Co. I experimented with modifying the Walthers kit a while ago. I've since picked up several more, since I'd like to see if I can fit in two tanks, which will also serve as view blocks. I've also been picking up supplies to scratch build the supporting structures. I'd prefer that it look different from the stock Walthers kit (it will be right by the aisle), and the structures for the two tanks were quite different from each other and I'd like to capture that.
But I've continued to try to dig up more information about the industry itself, and decided to pick up Jeff Wilson's Industries Along the Tracks 4. 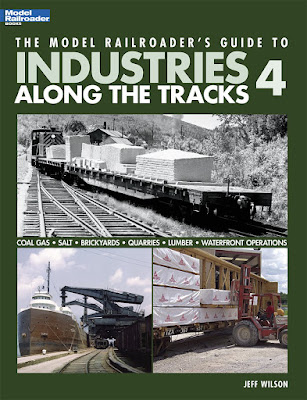 Although the whole book is interesting and well written, the information on the Coal Gas industry was the most in-depth.
There were actually two similar products produced and stored in tanks like these for gas lighting, heating and cooking. These were predecessors to, and entirely replaced by, natural gas. Underground pipes were run to homes and businesses to deliver the gas, which also made it easy to convert a city to the less expensive natural gas in the '60s.
I was familiar with Coal Gas, which is a flammable gas captured from burning coal. The biggest by-product of this is coke, and I didn't know what New Britain Gas Light Co did with this. Did they sell it locally and truck it to dealers? Did it get shipped out in hoppers to be used elsewhere? I wasn't sure, and hadn't found any info.
The second process is known as Water Gas, which is also known as the Lowe method. In this process, steam is injected through the burning coal. The resulting gas is less volatile than traditional coal gas, but it is then processed in a carberettor where vaporized oil is infused into the gas. This was actually the more common method of manufacturing gas. Most importantly for my research is that the fuel used to produce the gas could also be coke instead of coal.
In the book Jeff mentions Brown's Directory of American Gas Companies. As always, Hathitrust has several editions. The entries are financial in nature. I found that the 1917 edition had some key information not in the 1918 edition: 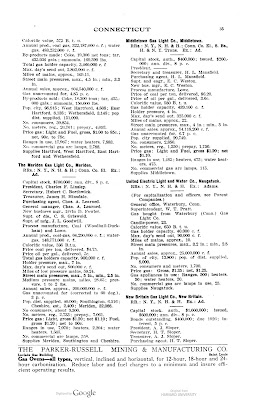 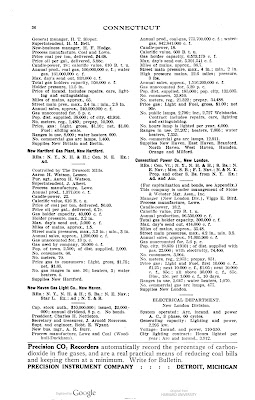 It notes that New Britain Gas Light Co uses the Coal and Lowe processes. Even better, it notes the annual production of 100,000,000 cu ft of Coal Gas and 161,000,000 cu ft of Water Gas. The population served in 1917 was ~43,000 (and even notes the number of ranges, water heaters, and arc lamps).
Jeff gives some rough estimates of how much coal and oil is required for a given amount of gas. Based on those, I've come up with about 400 hoppers and 40 tank cars of crude oil needed annually, or 1-2 hoppers and 0-1 tank cars daily.
Sure enough, the Sanborn Maps show all of the relevant structures which correspond with the descriptions in Jeff's book. 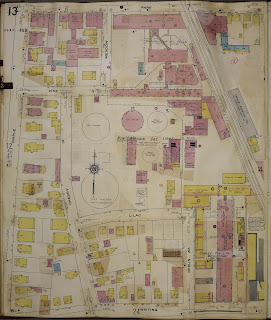 1950 Sanborn Map
Note the corrections with physical paper glued over the original. 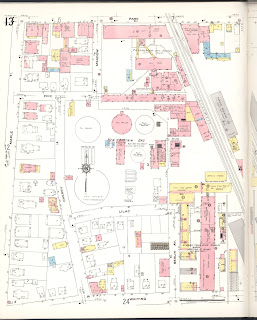 1954 Sanborn Map
The Oil House has been replaced by horizontal tanks.
I'll need a vertical oil storage tank as well. There is quite a large amount of oil storage capacity on the property, so I may lean towards 1-2 tank cars/day. 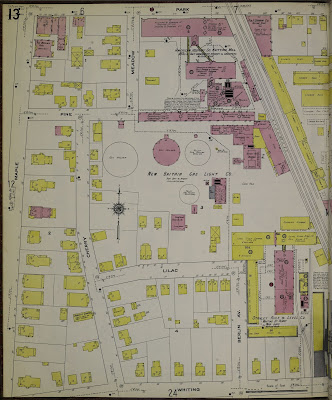 Email ThisBlogThis!Share to TwitterShare to FacebookShare to Pinterest
Labels: Commodities