I was recently going through a number of documents that I have regarding passenger operations. It's not something I have dug into a lot, simply because on my layout it's just a station stop for every train that comes through. But when researching what I had on the Conductors' Reports for the freight operations, I found that I had the information regarding Forms 1591-1595 for the Conductors' Passenger Train Reports.

I have three different copies of General Manual of Instructions for Conductors and Ticket Collectors. 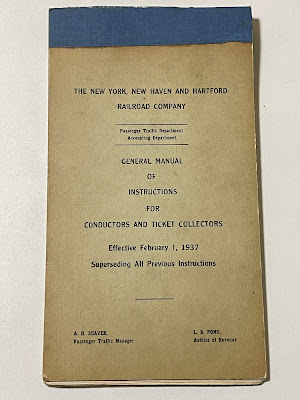 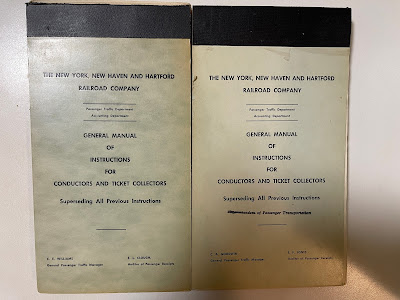 I recently acquired one of these other two. They are undated and, I thought, identical. It turns out they weren't. The Traffic Manager and Auditor are different at the bottom of the cover.
At the bottom of most pages are notations indicating when that page was published. For example:

Not all of them have this notation, and some that have a revision notation don't have the correction notation. But after looking through it, it seemed clear that the Correction No. was sequential and indicated the number of changes that had been made in the booklet as a whole over time. I was unclear whether the Revision No. indicated is was the 3rd Revised page in that issue of the booklet, or the 3rd Revision of that specific page. While pondering this, I noticed that the two later books weren't identical, and had a number of different pages that are easy to identify because of this notation. Curious, I made a spreadsheet to identify the differences.

It became clear that the Revision number was probably referring to that specific page. The book confirmed this and also another practice that I had identified in numbering the forms, but had never seen in writing.

(c) This Manual supersedes all previous Passenger Traffic Department and Accounting Department circulars. The instructions are issued in loose leaf form and all additions, cancellations and amendments will be published in loose leaf revised pages with effective date shown thereon. When page is reprinted the first time, it will be designed "1st revised page." Each subsequent reprint of such a page will be numbered consecutively, i/e/ "2nd revised page," "3rd revised page," etc. When there is not enough space on a single page for additions, changes, etc. additional pages will be added as may be necessary, and to which the same page number will be given, but in addition thereto, a letter in alphabetical sequence will be shown as "page 10-A", etc. On revised pages the symbol "*" will be shown against items which have been added or amended, but not against items brought forward to revised pages without change.

This entry confirmed the way the railroad identifies revisions of a form:

(g) Suffix number shown on forms after regular form number refer merely to the number of times that form as been revised; for instances, form 346-13 is the thirteenth revision of form 346. For this reason form suffix numbers are not shown in these instructions.

The section I referred to before, regarding the Conductors' Reports, is inserted in the books prior to the Index, and numbered from page 1 to 5. The Index uses Roman numerals for the page numbers (I-VI), and then the book starts at page 1 again. I find it interesting that it is inserted in two different books since it's not contained within the Index. It's the same format (size and number of holes punched) so it appears it was designed to be added to it, but for whatever reason was not incorporated into it.

Oddly, page V of the Index has the same revision and correction number in both copies, but differ significantly in their content. It is primarily a list of corrections, in one book from Correction No. 277 to 476 and in the other book from 400 to 583. Both are 1st revisions, Correction No. 276 and dated 7-1-55.

I didn't notice such an error elsewhere, but it seems like this is a rather important page to get correct...

The book is primarily concerned with the processes of collecting tickets, payment, and verifying that every passenger has paid (including checking the saloons). For example, I didn't realize there was a $0.90 surcharge for the Hell Gate Bridge that had to be collected if the ticket didn't already include it. The map I mentioned shows various non-New Haven routes for which passage over Hell Gate Bridge is free. The second (almost identical) version of the map doesn't reference the Bridge Arbitary at all, and instead is referencing free transfer privileges in New York and Grand Central Station.

Once I started digging, I decided it would be easier to make a spreadsheet and found that only about a third of the pages are the same across all three books. Another third is the same in at least two of them, and the final third is different in all three. I even started compiling a comparison of all of the differences but, while interesting, I decided it was an exercise better left for later (or someone else) since the minutia of changes in collecting tickets on the NH wasn't very relevant for what I'm doing.

Something that is often forgotten when operating passenger trains on a model railroad is that the time listed in the time table is the departure of the train, not arrival. Sometimes it will list both the arrival and departure. So to run on schedule it's important to arrive several minutes early, but not leave the station until the time noted on the Time Table.

From a modeling standpoint, there is little here that is likely to be used, but there are options. At RPI we experimented with some simple paperwork to simulate the basic job, and make station stops a bit more interesting (and probably last a little longer.

In the bill box there were "waybills" for people and baggage. Each one had a train number, and either the number of people or pieces of baggage that got on or off. A simple table was used to track the number on the run and, if I recall, we experimented with either picking up or leaving the cards there for the next session.

It would be easy to go a step further if one was more interested in passenger operations by using the actual Conductors' Reports, and replicas of the tickets and baggage check tags instead.

Model passenger trains are often run with just an engineer, even when the layout has two-person crews for freights. But with a passenger conductor, they could handle the tickets and complete the conductor's report.

It would be educational, and interesting to me anyway, for a layout with long passenger runs. Particularly on our shorter-than-prototype runs, and makes the process more than just run-stop-wait and repeat.

At RPI, one of the few layouts I've run with very long (and frequent) passenger runs, there were often long waits after arriving at the station since the short runs (even with a fast clock) made it difficult to replicate travel time between stations. The paperwork helped fill these longer waits, and also drew attention away from them.

Completing such paperwork certainly won't be for everybody. But if your layout is particularly focused on passenger operations it seems like it could be an interesting addition.

Here's a variety of tickets, each of which is mentioned in the manual and serve different purposes. There are many others that I don't have copies of yet. 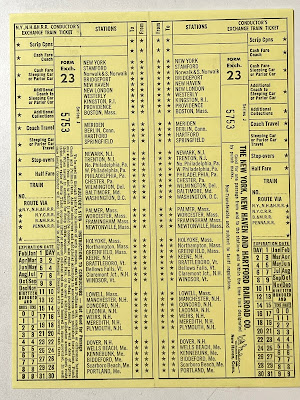 Exch 23
A ticket for cash fares beyond conductor's run to stations on:
B&A, B&M, and PRR. Also used for stop-over. 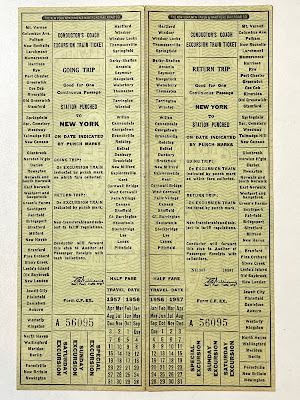 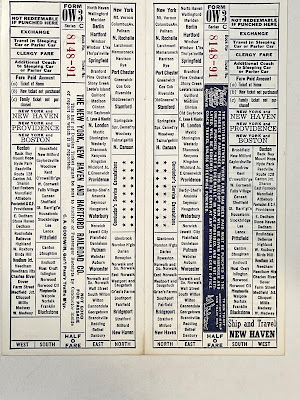 OW3
A one-way ticket for all stations except Cape Cod Points.
Since there is text on the back of this one, here it is: 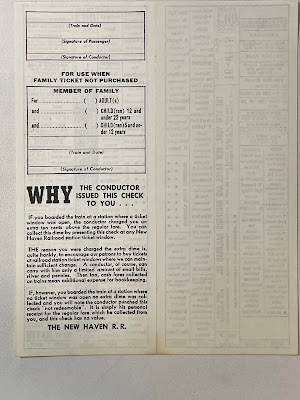 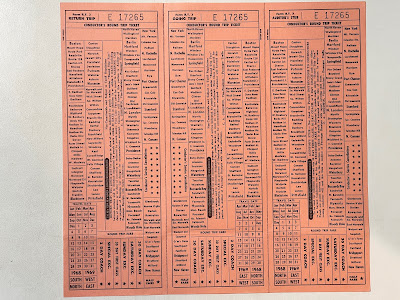 RT-3
A round-trip ticket for all stations except Cape Cod points. 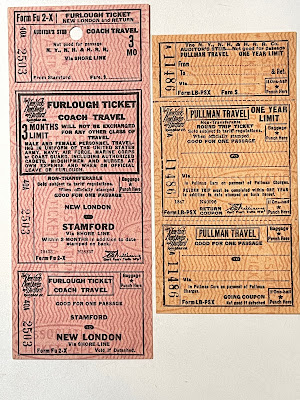 Fu 2-X and LB-PSX
Neither of these are listed in any of the three books.
The first form looks like it is for furloughed military personnel. It's not dated, perhaps during WWII?
The second is for Pullman travel, which I think was needed in addition to regular ticket. 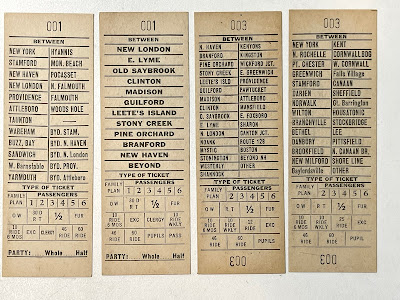 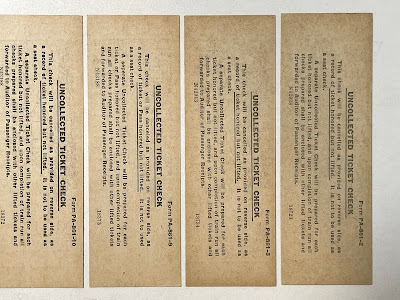 While the number after the dash is usually a revision, these all have different info on the front. They aren't listed in the books, at least under the forms, but the instructions indicate they are to be used to account for tickets that are not lifted (taken from the passenger). A physical ticket or form appears to be required to correspond with the report submitted by the conductor at the end of the run.

They had specific envelopes to return the reports/completed forms. Sleeping cars and club cars had separate envelopes from the tickets. I don't have any of these specific envelopes listed, but they can be recognized because they also have form numbers. This one is listed in the book as a plain envelope, small. 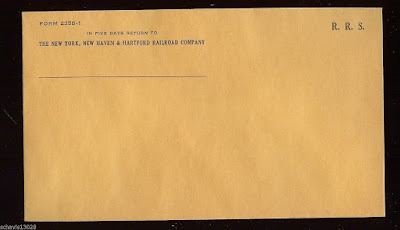