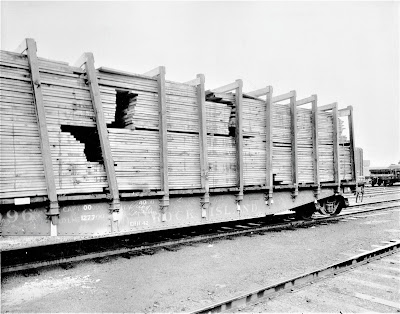 This is an undated photo, in an unknown location on the New Haven. In addition to the good view of the lumber load, there are a lot of chalk marks. With a reweigh date of 11-42, it places it in late '42 or sometime in '43, perhaps early '44. Looking very closely at the photo, I can see that the car was built in 4-30.

Unfortunately, only the last two digits of the road number are visible. I don't have any Rock Island specific data or books, so how do I figure out what series of cars this is, and whether there are any appropriate models?

The best collection of flat car photos I have is Railway Prototype Cyclopedia Volume 20, which has an excellent 85 page article on flat car loading practices. Pg 40 has a photo of 90913. This car has a large splice plate in the center, similar to but not the same as the plates used on the cars represented by Sunshine kit 45.9. In addition, the ORER notes this series is new in January 1943, so it wouldn't have a reweigh date, much less one in '42. (The Sunshine model is a prototype in the middle of this series).

Next up, check the Car Builders' Cyclopedias, the American Car & Foundry and Magor Car Company books...nothing.

OK, no luck there. Of course, I have to search the internet, and I found this thread:

It's an excellent collection of flat cars with loads, but the second photo is the one of interest to this post. It's car 91932. It looks very similar, with a trust plate in the same general location (the lettering is different), the number and placement of stake pockets, etc. Unfortunately, it's not a number that is listed in the 1943 ORER.

Based on the prototype information from the Sunshine kit, the RI had a number of 43' flats built in 1923-4 that were quite similar to the USRA flat car design. That's interesting and points me in the direction of a January, 1997 issue of Railmodel Journal has an article starting on pg. 53 by Richard Hendrickson on the Red Caboose model and similar cars.

The Red Caboose 42' flat car was based on a NYC prototype (Lot 598-F) that was built in 1930, but is very similar to the USRA design. The most common modification to make is the location of the stake pockets, along with substituting Tichy or Grandt Line cast stake pockets for the pressed steel ones that come in the kit.

The RI cars were in the 91750-91999 series, and the car in the thread above is one of those cars, along with the 93000-93249 series built in 1927. But these are all off the roster by 1943 (probably earlier) because they were being extended in the program that produced the cars modeled by Sunshine.

But overall, the Red Caboose model has the right look. This car does resemble the USRA design, but longer, and based on all of the RI flats I have seen in photos it appears this is the design they favored. It would be nice to get a photo of an end sill in addition to potentially confirming the series of cars.