I wanted to try doing a deck that was less distressed, as it seems like the railroads maintained them better in my era. I also hadn't tried the AK Interactive paints that I had received for Christmas - Old and Weathered Wood Vol 2.

Although it's not evident in the photos, the first deck I did still has a slight sheen in person. A matte clearcoat might resolve this, but when looking at it, part of it seems to be the smooth finish of the plastic itself. So I lightly sanded the entire deck with a sanding stick to start. This process also highlighted the very subtle differences in board heights on the Tichy model that weren't evident to the naked eye. Nice touch!

Since this is lightly distressed, I simply used the razor saw to work on the board ends a little bit. Even that probably isn't that necessary. If I decide the light sanding isn't enough, it will be very easy to go back and distress it some more and refinish those parts.

The base coat again is a thinned light gray, with as many coats as looks "right" to me. 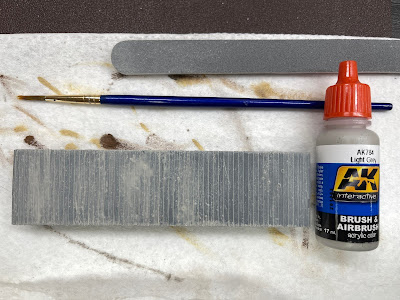 For the wash, this is the same German Camouflage Black-Brown as last time, but it's the regular paint instead of the wash. In other words, it's the same color, but thicker. This time I used a flow aid instead of just water and you can see it flows into the crevices better and more consistently. It doesn't have the mottled look that the tap water had. 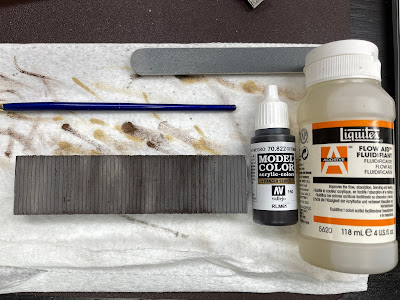 Here it is after it has mostly dried. You'll get a feel over time for how it will change while drying. By working in thin layers, if it's not a strong enough effect, I can just add another layer. 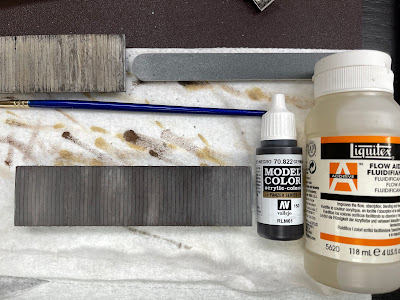 I then did a thin coat of a very light brownish gray thinned and applied as a filter to alter the color of the entire deck towards a sandy brown. 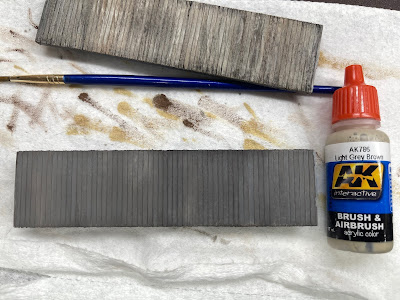 Then, using several colors, I highlighted individual boards. It was applied wet, but quite lightly and then basically dry brushed across the board and off. This is to provide some of the variation in colors. I probably should have started with the gray and then mixed in a little of another color to shift it slightly, instead of it being so dramatic. 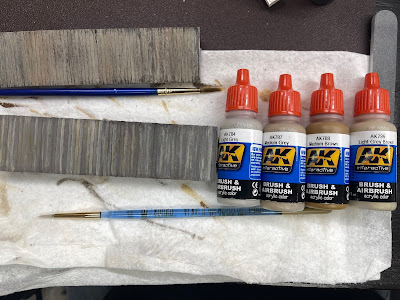 I mentioned in the last post that the amount of paint used is very little. Here's a look at my palette for both cars. I haven't bothered to clean it yet. In the center are the four colors above, wet because that's what I was working on when I took this picture. You can see that I used a very, very small amount of paint on both decks. 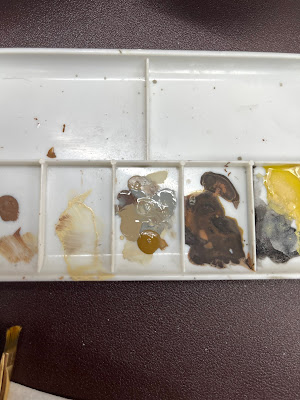 The next step is to blend it in with a filter. 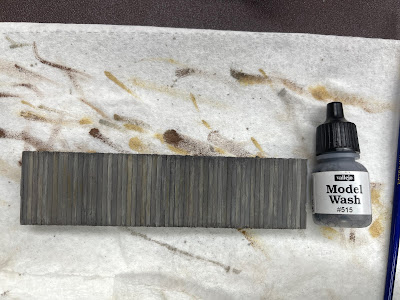 Then the application of a buff filter, fairly heavy to alter the color and blend it more. 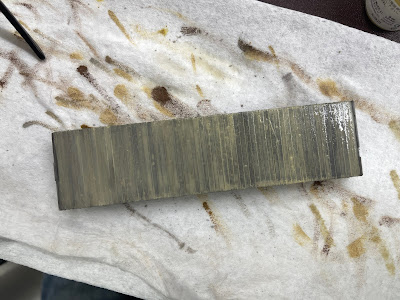 After that dried, the variations still seemed to severe. 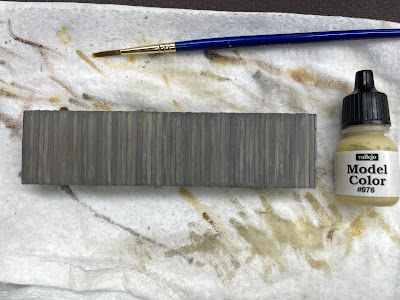 So I took three grey and brown colors and did a much heavier coat, blending the colors to provide some variation, but less evident. The coat is thin enough that the more severe variation just bleeds through. 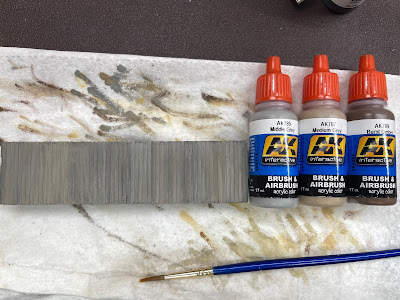 That looks much better. Although there is a subtle effect from the earlier highlighting, next time I'll probably just blend them when applying them. Then another wash of a blend of the light grey and black-brown. 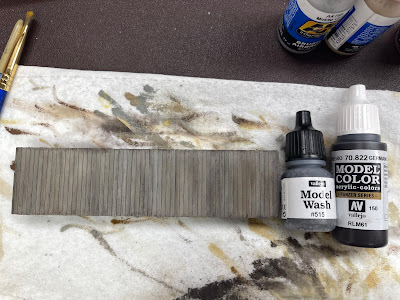 To tie it together, I applied a coat of the light sienna pigment while it was just a little damp. The idea being that the paint will hold the pigment and I won't have to apply a binder. 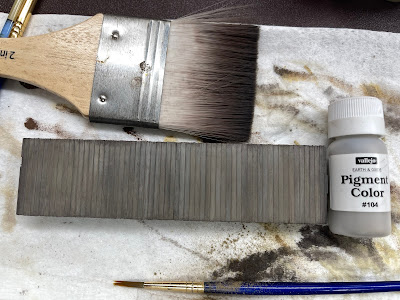 At that point I checked it out next to the other deck, and on the layout. 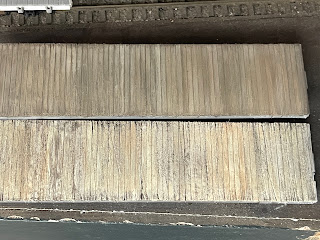 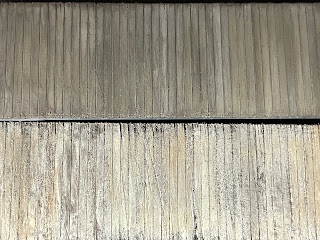 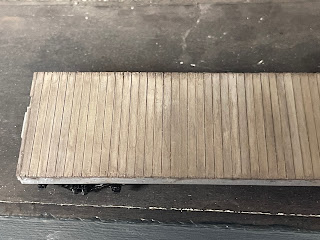 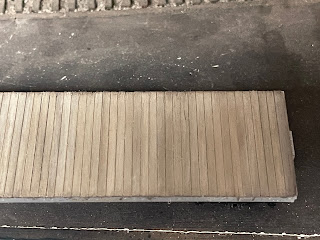 I like it, but decided to do one more wash, using the flow aid, to highlight the details a little more. 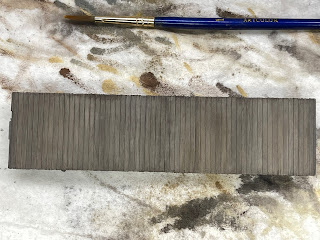 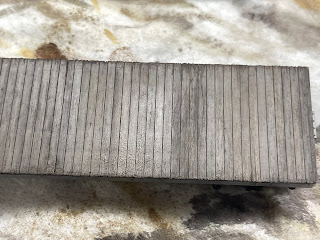 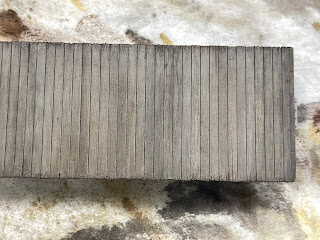 I could have done better with distressing the edge of the deck in this location. Something to be cognizant of when working on actual models. That's why I'm practicing! 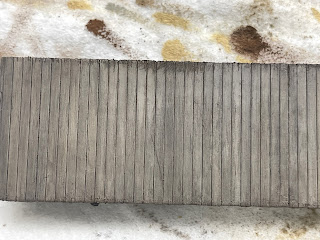 So here they are side-by-side. One thing I should point out is that the lighting, the camera, and the device you are looking at a picture alters the colors. While I'm very happy with how these are photographing, it isn't quite the same color as what I see in person. The pictures above are under the Barrina lights on the desk.
This is taken on the layout. Lighting is just the daylight fluorescent ceiling fixtures that aren't directly over the layout. 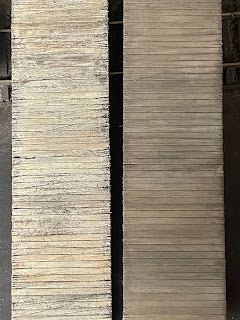 This is in staging, with the Barrina led lights at 6500k. The lights are fairly close to the layout. As you can see, they look far more gray. 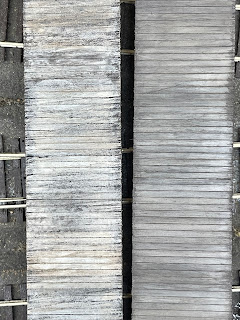 Here they are outside in late afternoon sunlight. 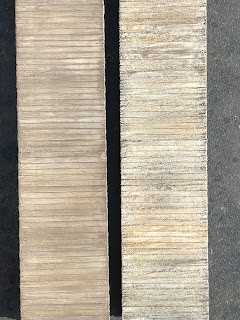 Anyway, I'm very happy with how these are coming out, so I need to finish up those flat cars so I can get to work on the decks. It also may look like this is a long process, but the reality is that acrylics dry pretty quickly. So it's a quick coat, which takes maybe a couple of minutes tops, then wait 15 minutes or so. In the meantime I was working on other things.

As a side note, I got a storage case for Christmas designed for Vallejo style bottles. There are removable racks designed to hold the bottles upside down. However, several of my paints have been much thicker than they should be, even the washes as I've noted in the last couple of posts. While I've had this issue with other paints (especially Tru-Color), it has never been a problem with Vallejo, at least not for me in the past.
I noticed that a number of them still sounded very liquid, but didn't come out that way. I've come to the conclusion that while the "traditional" method of storing Floquil/Pollyscale paints upside down works well for those, it does not work well for these. I think the problem isn't that they are getting too thick. Like other paints, it separates over time, with the heavier parts (the pigment and acrylic binder?) settles out. But with the dropper bottles, this settles into the throat and is very hard to mix out once it does.
So while I love the dropper bottles, I had never stored them upside down until the last year or so. It doesn't seem to be a good idea, and it's something that I won't be doing any more.
Posted by Randy at 12:26 PM