HDX-5 in Newington and New Britain

I've been trying to maintain a steady pace of posts this year, but at the same time I am also rebuilding my website.

I built my current site on Google Sites. But like so many products and services Google has created, they have decided to end the old Google Sites and create an entirely new (and less flexible) product. Long story short, I've been rebuilding the site on the new Sites (after looking at alternatives), and I've taken the opportunity to essentially rewrite most of it as well. It needed it anyway.

When I get there, it has lots of new information, compiled information from the blog (that was the point anyway), and new photos too.

Since the new site is still some time off, here's a teaser. I've been working on the page for the New Hartford Local. Kent Cochrane photos, of course, c1947-8 unless noted. 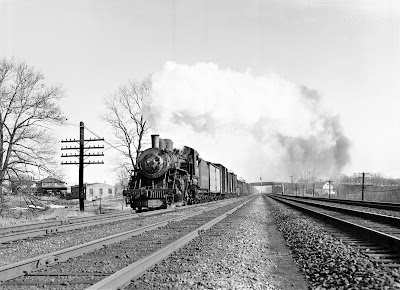 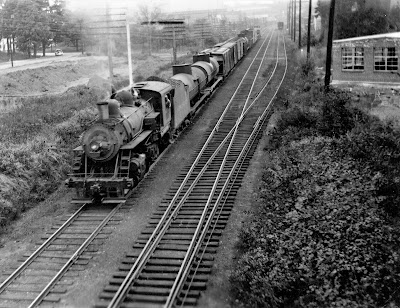 479 westbound with HDX-5 with a 15 car* train taken from Black Rock Bridge in New Britain.

*This is noted by Tom McNamara on the back of the photo, which comes from his collection. I count 11 cars. The date is also stamped on the back of the card, but it doesn't look like mid-October to me. All of the distant visible buildings on the north side of the track (to the left of the train) are part of Stanley Works.

The photo of 423 is great, because I could finish the K-1-d that I have since it has Baker valve gear. Since HDX-5 ran with steam until the end of 1948, it makes it easier to get it up and running. Then I can worry about how to fabricate the Southern valve gear for 479 in the future. Of course I'll still have to see if I can get it to haul 11 cars up the helix...