Despite the great amount of information in the articles and information on the IBM-Teletype system, I still have significant holes in the paperwork actually used by conductors on the road.

This is the title page from Form T-488, and while it was issued August 1, 1927. There are a couple of pages of instructions, and the rest of the book consists of Station Numbers, mileage, etc.

I have two other books that mention Conductor's Passenger Train and Freight Train Reports:

The SCS-1 book is effective October 15, 1944, and supersedes T-488 as of that date. The SCS-2 book is dated December 1, 1956. They provide the station numbers and car reporting marks to be used in Passenger and Conductor Train Reports. SCS-2 provides a larger list of forms that they apply to, and the form numbers:

I have examples of several of the above forms (1464 Home Route Card, 1480 Report of Cars on Hand, 456 Daily Yard Check), but I don't have 1581/2 Conductor's Freight Train Report.
Since SCS-2 is from 1956, it's clear that the Conductor's Freight Train Report was still in use in the era of the IBM-Teletype system. I believe this is the report that the Conductor would complete and send to the Car Service Department and records all of the car movements (drops and picks) made during the run and is the same thing/evolution of the Conductor's Car Report (particularly since SCS-1 superseded T-488).

Although I don't have further information on the Conductors' Freight Train Report, I do have information on the Passenger version from the General Manual of Instructions for Conductors and Ticket Collectors from 1960. This has the instructions for completing the reports themselves, and, perhaps more helpfully, identifies the difference between them. It appears that the forms themselves are identical, but have a different number of copies.

Each part is on a different color paper, and is sent to a different office. I've made educated guesses as to which forms have which colors.

The Passenger Train Reports are for recording the number of passengers at origination, termination, and certain key terminals. These are recorded per car, and also indicate the type of car. While interesting, probably not something that would be implements on a model railroad. Having said that, we did try something similar at RPI where there were cars (similar to waybills) indicating the amount of passengers and baggage picked up at each station to add something more to the process than just stopping at the station. Not necessary in my one town layout, but something to consider.

T-488 has extensive instructions regarding the completion of these forms. The later booklets don't have detailed instructions, they may be printed on the reverse of the form itself, or in another booklet that I haven't found yet.
The forms include the date/time the train leaves and arrives, each engine including points to/from by engine if different than the entire run, all of the cars in the train as they stand, the points to/from for each car, caboose number in the space provided, numbers of stations and sidings as noted in the book (superseded by SCS-1), mileage for each car, type of car (it doesn't use AAR types such as XM, a box car is to be listed as 'B'), weight of each car, plus some special instructions.
This report is forwarded to the Superintendent of Car Service upon completion of the trip, and the Conductor must keep a copy in their train book. While it sounds like a lot of information, and a lot of handwritten work (it is), remember that the Conductor had plenty of time to complete the paperwork at the desk in the caboose while running.
Even if later versions of the form had fewer columns, the most important columns and process remains - the movement of every car must be recorded. Cars picked up were added to the list on the way, and the final destination of a car spotted at an industry was also recorded.
The train would be recorded on the form with destinations, then any known pickups below. Train Orders could be used to provide instructions for any new pickups along the way, and the Conductor can add those to the form as well.
I don't have a New Haven Conductor's Train Book either, as referenced in the rules above, but I do have is a Reading version from 1929. The book has the full instructions on the first couple of pages. My copy is very fragile, and the cover and instructions are so worn that I can't scan them. But here's a picture of one of the pages: 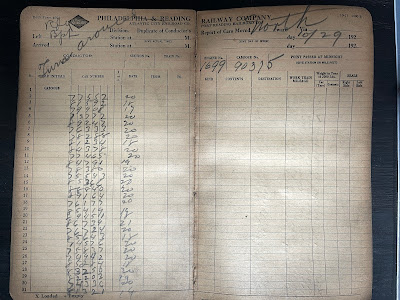 I also have a booklet of Instructions Governing the Preparation of Freight Train Conductors' Wheel Reports for Pere Marquette issued September 1st, 1929. Although this specifies Wheel Reports, it is clear that the basic process for the PM, Reading and NH were very similar.
--
As a side note - when Chris and I were discussing paperwork, and he mentioned that somebody had pointed out that the NYS&W listed their cars on paperwork like Conductor's Reports from the caboose to the engine. The evidence presented appears to be that the first line of the form has a preprinted line for the caboose, as it is on the above report.

However, I have always "known" that the Conductor's report listed the cars starting from the engine. I can't say where I learned this, but I still felt that it was incorrect. I'm a skeptic of "known" things without supporting evidence. So what evidence is there?

The Reading book I mentioned before states this:

3. Insert carbon paper between the wide and the narrow section of your report, and after the initial and the number of the caboose, which must be inserted on the first line commence at the engine and take the initials, number, and kind of each car as it stands in the train.

If you look at the pages of the Reading book I posted above, you'll see that Line 1 is labeled Caboose (there's also a place for the caboose in the header).
My buddy Ralph just sent me a copy of a Lehigh Valley List of Station & Siding Symbols and Home Route Numbers from May 1, 1946. In the instructions it states:

9. Caboose number, or number of car used as caboose, must constitute the first car number entry, followed by other cars in the order of their appearance behind the locomotive.

In the Let's Operate a Railroad book, published in 1957, there are several comments about this and related processes. For example, a yard clerk will complete a similar report regarding what cars on are a given track, including road, number, loaded or empty, type of car, door seal numbers, etc. It notes the clerk can start at either end, and notes which end was their starting point. But it goes on to say, "When a road conductor runs over the road he keeps his stack of waybills in the exact order of the cars in the train - lined up from engine backward."
So it's interesting that the two are differentiated. Later, in a section about Home Routes, it mentions a, "line-up form," that is sent to the dispatchers office which, "...will show...a detailed breakdown of the standing of the train by groups reading from engine to caboose..."
I have seen a blank O&W form that also has caboose preprinted for Line 1, just like the NH Form 1426-1 and the NYS&W form. This doesn't surprise me, since I've seen a lot of forms that are very similar, if not identical, from other roads in the era.
I don't have documentation for NYS&W or most other roads, so a given road might have used a different process. But I think that is also unlikely.
While the rules weren't standardized in this era, they did base their rules on the rules published by the AAR, and they were very similar from road to road with some exceptions.
There were also undoubtedly companies that specialized in printing forms for the railroads, and many of those forms were somewhat "standardized" simply because it made printing them easier and cheaper. Something the railroads always appreciated. In other words, the forms were the similar or the same because the general processes were.
I'm comfortable in saying that the NH recorded the train from the engine back, along with the Reading and LV,  and that seems to have been the general standard as reported in the book Let's Operate a Railraod which was also published during the era in question. I believe the process would be the same for any road unless there are instructions/rules that state otherwise.
As always, YMMV.
Posted by Randy at 10:35 PM