This booklet tells the story in great detail of the old and new Yard Operations processes and paperwork. In my quest to better understand the the inner workings of  New Haven Railroad, this was the single most informative document I found regarding the paperwork and processes used in yard operations.
This is that story. 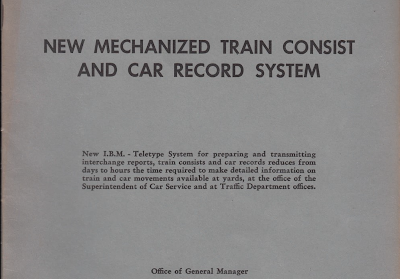 I first learned of the booklet in a post on the NHRHTA Forum that led to a post on The Arts Mechanical where John C. Carlton shared the entire book.
I later hunted down my own copy of the booklet, and I should have pulled it out when I started posting on Yard Operations again. It's not uncommon for me to take a quick look through a document like this when I first get it, only to set it aside until I get back to that subject.
The first section of the booklet contains an explanation that is similar, but not exactly the same, as the Along the Line article of the system and the processes. So I won't repeat that here. Instead, what I found most useful are the exhibits.

One notable difference between this process and the one used for tank cars earlier is that the punch cards also have the information printed at the top of the card, so they can be read by people. They also aren't codes like what was used on the tank cars, but the actual data (which then shows up on many reports). I covered the basic process in this post.
Exhibit 1 is an overview of the new process compared with the old process and is a nice overview of how the yard operates. Exhibits 2-4 are flow charts that are directly related to this summary. 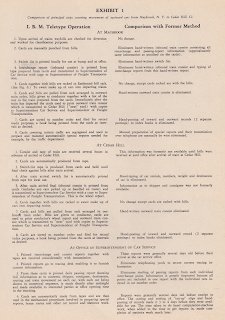 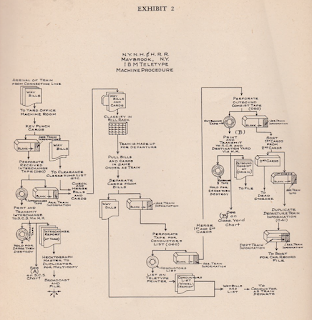 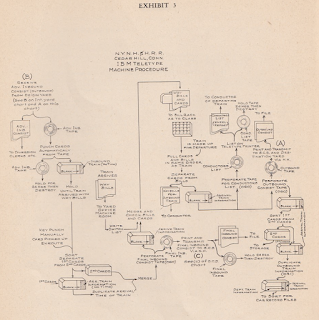 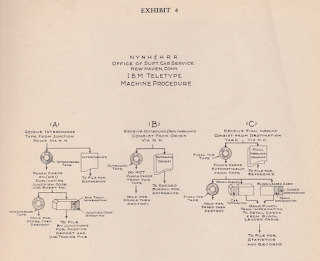 This is quite informative, and covers the process well, but the focus is understandably on the paper processing process, not necessarily what happens on the ground. What I found more informative are Exhibits 5-12, which provide examples of the old paperwork, and the new paperwork that replaces it. 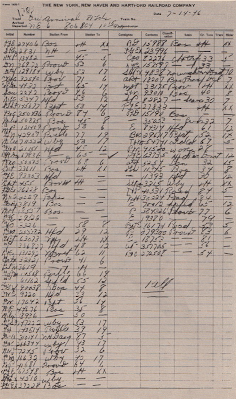 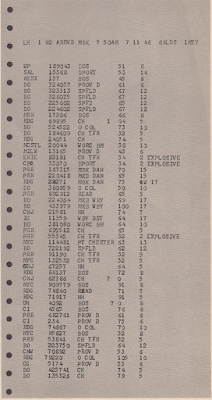 These are old and new switch lists, in this case for Maybrook Yard. Of note is that the handwritten one doesn't follow the form, instead they simply divided it into two large columns to fit all of the cut on one form. The information as used is Car Initial and No, Station from, gross tons, and Track No. However, there are several cars that don't indicate either, so I'm not sure what to make of those.
The teletype one appears to have the same information. I don't know what the 1, 7 and 7 between the Station From and gross tons for three cars means, nor the QU 17 for RDG 2271 means.
Also of note is that the switch list is specifically for use in yards. On the handwritten form, you'll note a column (not used) that says 'Rider.' This is referring to the brakeman that rode the car down the hump, if one did. Although the form does have a Station To and Consignee field, so it could be used for the road if those fields were completed.
The teletype replacement, however, makes it clear that it is only useful in the yard, since all of that information is not on the report.
This is the form (whichever version is appropriate for a given layout) that can be used when modeling Yard Operations for an arriving train. If it's the handwritten version, the Yardmaster will prepare the form for the switching crews to break down the train. 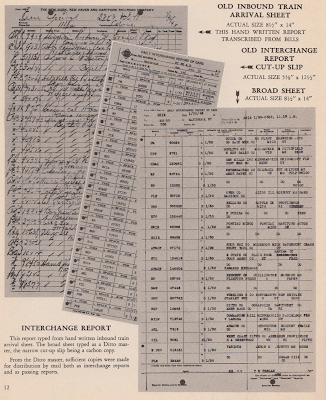 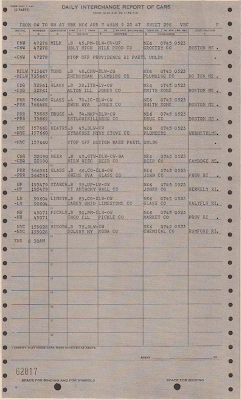 The page showing the old forms show three different ones. The first is an Inbound Train Arrival Sheet. This form was completed by yard clerks to record the consist of the inbound train. This was provided to the Yardmaster so they could create the Switch Lists.
The information was also used to type up the other two reports, the Broad Sheet and Interchange Report Cut-Up Slip were typed simultaneously, the Cut-Up Sheet being a carbon copy. These two were replaced by the new Interchange Report.
A process change eliminated the Train Arrival Sheet, and they started to work directly from the waybills instead of a clerk handwriting this report. This is easy to replicate on the model - the inbound conductor gives the Yardmaster their waybills, and the Yardmaster can use those to write out the Switch List. 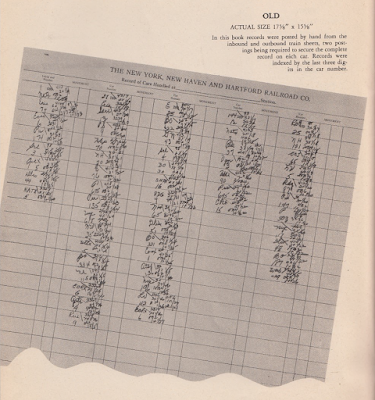 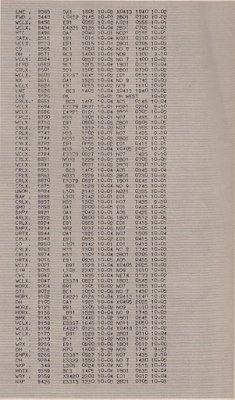 These were accounting forms, recording the movement of every car through the yard. While interesting (and a gold mine if you can find historical ones), they serve little purpose for modeling. 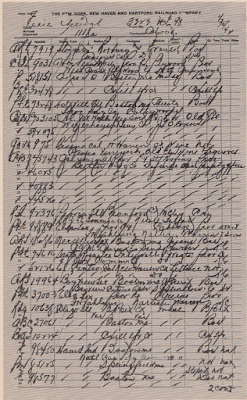 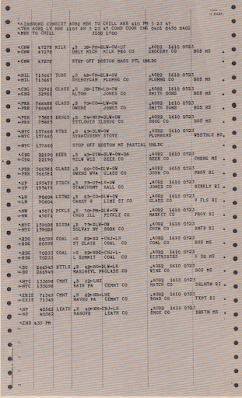 The Inbound Train Consist was transcribed from the waybills, and only used in the yard. It's not clear what the difference between this and the Train Arrival Sheet is.
But the biggest change, aside from the report being printed by teletype, is that the new report was received as the train leaves the prior yard. So it would be prototypical to have Inbound Train Consist reports for each inbound train, which would be compared to the waybills to account for any cars dropped or picked on the way. This is a major change in the way the railroad operated because the Yardmaster would know ahead of time what cars are inbound and prepare for their arrival, instead of having to wait until the train arrived and the handwritten report was completed. 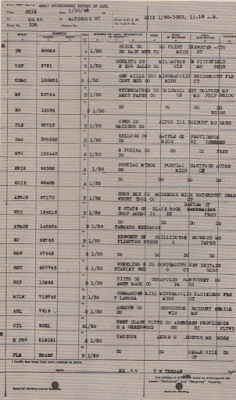 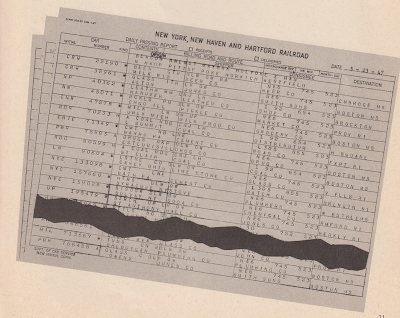 Cut-up slip reports (like the Interchange one above) were literally designed to be cut into individual strips by car, so they could be organized by Initial and Number when compiling other reports, such as this Passing Report. With the new punch cards, a sorting machine could be used to resort them prior to running through another machine to generate the teletype tape needed to print the reports locally or the Car Service Department. It looks like it was for accounting purposes (per diem, etc.) and won't be needed on a model railroad. But you can see how much more efficient the punch cards made the process. 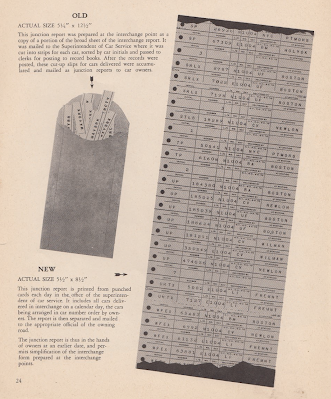 As you can see, the old Junction Report were cut up slips that were gathered by road and mailed to car owners. The replacement is an actual report generated from the punch cards. A much more elegant solution. Again, not something needed for a model railroad. 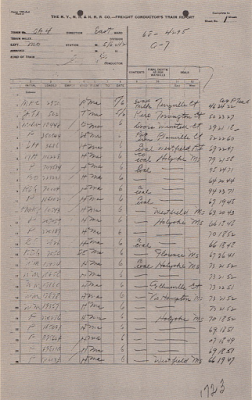 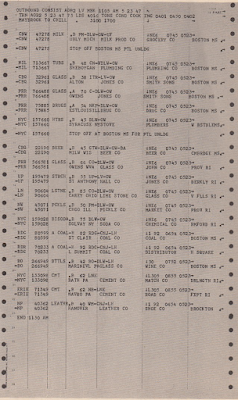 Along with the Switch List, this is the most important report for modeling in my opinion. It states:

This report is a copy of the hand written wheel report, the original of which was given to the conductor with the bills...the train could not depart until this report was made out.

No copies of this report were given to the "next" yard, but the conductor's copy of the wheel report was mailed to the Superintendent of Car Service after the train reached its destination.

The handwritten one happens to be for OA-4 (Maybrook to Hartford) on May 6, 1942. There are cars bound for Terryville, Plainville, Westfield, Holyoke, Florence, Collinsville, and North Hampton that would go via the Highland Line. Cars for Terryville, Torrington and Winsted will be dropped at Waterbury on the way to Hartford. In 1941 it looks like OA-4 may have stopped in Plainville too. In which case all of the remaining cars would have been dropped there.

The loads are interesting too, one box car (NYC?) of evaporated milk for Terryville, a GATX tank car with kerosene for Torrington, a MILW box car of doors for Winsted, a PRR gon of pig iron for Plainville, and the remainder of the train is for anthracite (5 cars) and bituminous (16 cars) coal. Hoppers were from PRR (9 cars), WM (5 cars), RDG (1 cars), and one each from D&H, NH, B&O, and CRR, and PMcK&Y. One of the Reading cars and the Pennsy car of pig iron are drop end gondolas ("DE"). The total consist is a box car, tank car, box car, gondola, 10 hoppers, another gondola, and 10 more hoppers. This highlights how much coal came via Maybrook.

The teletype version lists consignees, but the handwritten one does not. Furthermore, the example for OA-4 doesn't have any indication that the cars for Winsted or Torrington would need to be dropped at Waterbury, where it has a scheduled stop, and in that year it may have been scheduled to drop the rest at Plainville. In other words, they seem to be missing the operational part of the run, which is required for reporting to the Superintendent of Car Service.
So I'm not clear what report (if any) would be used by the conductor for manage the work on the way. In my opinion, there must have been some sort of document that provided instructions on which cars to pick up or drop (similar to the Switch List), if for no other reason that the railroad operated by written orders. They didn't leave things to chance or interpretation, everything was documented, even if it was a form that wouldn't be filed for later reference.
So there are still some mysteries to solve, but I think this gives us a much clearer look at the yard operations on the New Haven in this era.
Posted by Randy at 2:19 PM