As I noted, the consist books only provide a complete consist for Train No 131/136. They also provide a consist for 128/129 when that train switched from the Comet to a regular locomotive-hauled train.

Starting in the 1950 book, though, it does have a list at the beginning of all of the equipment and the trains assigned. These aren't full consists, but at least I can tell which equipment was used to build the consists (and compare that with photos). The consist books also list which trains are assigned space for storage mail, and based on photos I know that every train had a baggage car. By 1953 all were replaced by RDCs 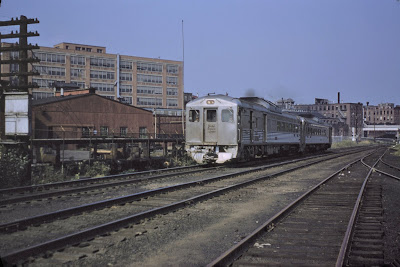 Not all trains run every year.

The RDCs are simple, I have the Rapido ones.

The two 8500-series cars for 128/129 in 1951 are the Pullman-Bradley lightweight Smokers, also produced by Rapido. I have them in both Hunter Green and Pullman Green, either of which will be appropriate for this train.

The 8270-series are the Pullman-Bradley 11-window lightweights I mentioned in the post on 131/136. I'm largely waiting for Rapido to release these (hint, hint).

I also covered the storage/express cars before. Either the Bethlehem Car Works wood baggage cars, or the old NHRHTA/F&C resin kits for the clerestory and turtle roof versions of the steel cars. The wood cars are the standard ones for these trains.

The 600-series cars, however, are a different story. These are heavyweight cars that were rebuilt from parlor cars. The Walthers 28-1 parlor car is a good starting point. You have to reverse both the roof and the floor, remove the interior, and then make a new side. One of the sides is correct for most of the cars, but the other side is not. In addition, there are at least 5 different versions of the second side. I'm still working on how I will approach these cars, although I have a few ideas. I'll need at least two of them, preferably four.