One of my ongoing projects to get the layout ready for operations is to gather the necessary information and supplies to build the passenger trains. It's easy to identify which direction the train is running, since they didn't turn the entire train at Waterbury, only the locomotives. So eastbound trains have the baggage car (and RPO where used) on the end of the train instead of behind the locomotive.
Train 131/136 was frequently photographed in my era, probably because it's the only daytime passenger train (12.30 pm and 5.40 pm). This is the only train with consistent consist information, as all of the other Highland Line trains are commuter trains and are not listed in the consist books.
Train 131/136

What exactly does this mean? I'll start with a picture: 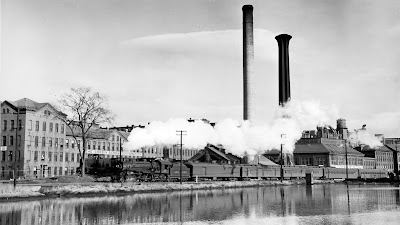 One of my favorite Kent Cochrane photos from March, 1947 of an I-2 with Train 131
In addition to the Russell & Erwin stacks and the 44-tonner shoving a hopper of coal up to the coal trestle, this is a fantastic side view of the entire train. It looks like a Friday train, due to the fifth car, but an extra car would also be added as needed on any day. 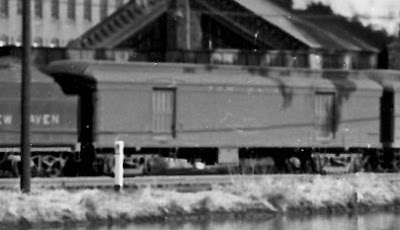 The first car is the Express car, that is, a baggage car carrying storage express mail. There's a compartment set aside for mail, 9 ft. from Boston to Waterbury, plus an additional 6 ft from Hartford to Waterbury. In most of the photos this is a wood baggage car, available as a kit from Bethlehem Car Works. It's Sparrows Point kit SP-61. I don't see it listed on the site right now, so you'll need to contact John to see if it's available. 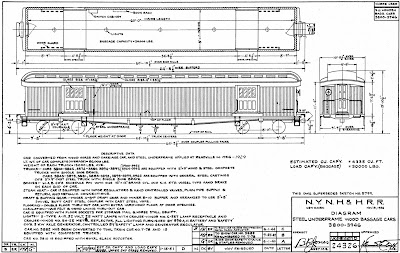 Note that the New Haven clearance diagram has the doors located in the wrong incorrectly (which resulted in the first run of the model also having them in the wrong place - John fixed the issue for the later runs). I purchased cars as soon as they were released, so I'll just be modifying mine. 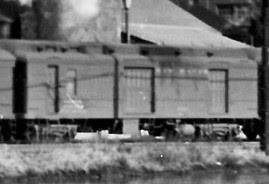 The second car is an RPO, or a 15' Apartment Car. This means that it has a 15 ft RPO section, and the rest of the car is a baggage car. 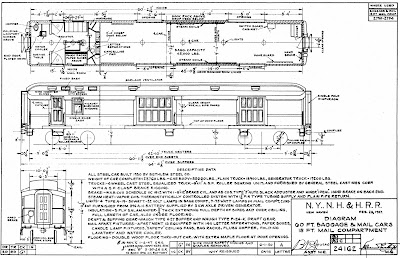 It's easy to spot 131/136 from this era because of the RPO as it's the only train on the Highland assigned one. This is also available from Bethlehem Car Works, kit #263 and it looks excellent. I'll be finishing mine soon. 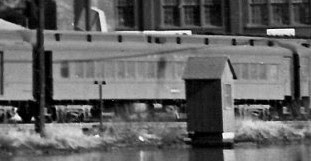 The third car is the Smoker, even though the consist lists a coach next. This is a heavyweight De Luxe (DL) car with mechanical (M) air conditioning. The De Luxe (also noted as Deluxe, or DeLuxe in NH documents) Smokers are numbered 6800-6823, 6824-6827, and 6829-6843. This car will be a challenge to model. I'll most likely start with a Branchline (now Atlas) single window heavyweight coach. I have a decent idea of how I'll approach it, though, I'll get to that process in a later post when I get around to building one. 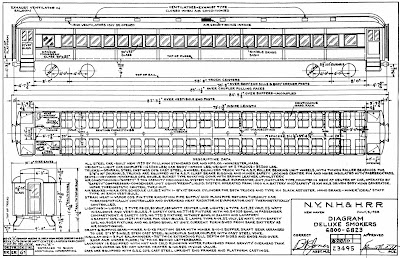 Note the 8 exhaust type ventilators, plus the round vent at the end for the saloon. On the Smokers, there is only a mens' saloon at one end of the car. The car is oriented in the photo with the saloon to the right, instead of to the left as in the diagram.

The final two cars are Pullman-Bradley lightweight coaches. They were built with mechanical (M) air conditioning, and are designated as streamlined (SL). The first one is from the 8270-8369 series of cars. These are known as 11-window cars and were built for commuter service with walk-over bench seating for 92 people. The second car, however, is a 10-window coach (8200-8269 series), with twin rotating chairs on each side of the aisle, and seating for 84 people.
There were 10-window Pullman-Bradley Smokers as well. However, there were only four of them (8500-8503) until more were converted in October, 1949, and they were assigned to specific trains.  Once more were converted one was assigned to this train to replace the 6800-series heavyweight.
Note that both of these still have full skirts. The skirting was removed from in front of the trucks starting c1949.
The 10-window coaches and smokers were both produced by Rapido in the past and can be found on eBay and at shows. In addition, to those cars, the 11-window coaches were produced by E&B Valley and brass from Custom Brass. Neither are up to the standards of the Rapido cars, which is why I have started experimenting with using the brass sides on the Rapido car. My buddy Bill reminded me that I'll also have to alter all of the rivet lines on the roof if I go this route. I've reminded him that Rapido still needs to do the 11-window coaches...
So it's the heavyweight smoker and the 11-window coaches that will be the most challenging aspects of this train, but I'm hoping Rapido will at least get around to the coaches soon.
This was the last train to run with steam on the Highland, until November/December 1948, since it received power at Boston. It was usually hauled by an I-2, but I have photos of this train behind an I-1, I-4 and DER-1 (DL-109) in this era. After the steam was pulled, it was usually assigned a DER-1 (DL-109), but was also run with a DERS-2b (RS-2) or DERS-2c (RS-3), before locomotive-hauled trains were replaced altogether with an RDC-1 and RDC-3 for this run in 1953.
Posted by Randy at 7:43 PM