For 1950 and later, I knew what I'd need for cars, even if it's not simple to model them yet. But in the many Cochrane photos in the 1948 and earlier periods, it was clear that the commuter trains were primarily composed of heavyweight cars. The question is, what cars would I need?

Trying to determine which heavyweight cars I would need was a challenge. As I noted, I have a number of consist books, but they don't list the commuter trains. I was also thrown off by what seemed to be a discrepancy between the photos and the documentation I had.

Looking at photos, it was clear that the windows on many of the cars were taller than what is on the Atlas (ex-Branchline) model. In the 30's the New Haven rebuilt much of their heavyweight fleet and in that process installed a taller nameboard, making the windows shorter and more square.

In addition, none of the photos are clear enough to have road numbers visible and worse, they are typically extreme 3/4 views so identification of the cars is even harder.

This seemed like the best place to start, at least to glean as much information as I could. The April 1950 and later ones were helpful in that they not only list (almost) all of the passenger equipment at the start, but it also notes the trains the equipment is assigned. So it's not the full consist information, but I can at least identify the types of cars that make up the consist.

Unfortunately, by that date, the Highland Line trains were only assigned Pullman-Bradley lightweights, with the exception of 600-series coaches being assigned in the September 1951 book. They are still assigned in the 1952 book, but with a notation that they will be replaced with RDCs when received. More on the 600-series cars in a moment.

I also have other resources like Summaries of Equipment, ORPE (the passenger equivalent of the ORER), and disposition lists that record cars that have been converted, condemned, destroyed, purchased or sold. So I could compile a spreadsheet to help determine what cars were still in service at the time.

But without specific documentation on the trains, I was stuck. So maybe I could start with the cars I could easily model.

Back to the Photos

Clearly some of the taller window cars were on these trains, so I had to determine a way to identify which classes. The answer is to look for additional features that are visible in most of the photos: The window spacing for the far left and far right windows, clerestory vents, whether they rode on 4- or 6-wheel trucks.

Here are some examples, crops from some Kent Cochrane photos: 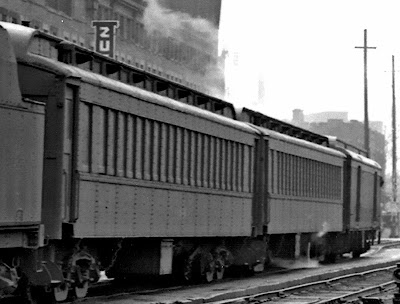 This one is nice because you can clearly see the rivet patterns on the car, with a splice plate (two rows of rivets), then a single row before another splice place. So the windows are in groups of two between the splice plates. 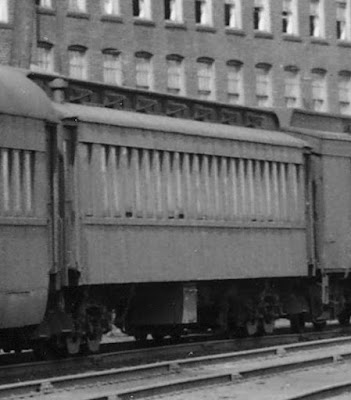 This one is a little tougher. It's 7 Ward vents and 6-wheel trucks. What's hard to tell is whether the end window on the right side is wider spaced. If yes (and I think it is) then it's a 7800-7950-series, not rebuilt. If not, then it's one of the 6700-series Standard Smokers. I've been having difficulty identifying thus train, The car just to the left of it is the ex-Besler coach. Behind the coaches are two baggage cars. If it is 136, then it should have an RPO, in which case this is probably a smoker. Otherwise I think this is a coach. Initially I thought it might be Train No. 472, which picks up the baggage car of storage mail bound for Hartford at New Britain station each day, but that's scheduled at 8.33 PM or 9.24 pm depending on the year/time of year.

For modeling purposes, even if this is Train 136 and that's a 6700-series Smoker, the consist books always list a Deluxe Smoker and this would be unusual. So I'm going to assume this is a 7800-7950-series rebuilt coach. 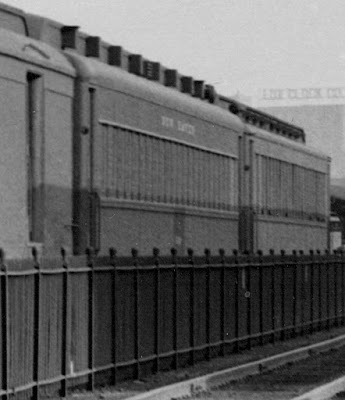 Waterbury, June 1947
This could be a Naugatuck line train, but it looks appropriate for the Highland. We can't see the trucks, but you can clearly see the difference between the shorter windows of a rebuilt car and the taller windows on the second car. I'll address the first car when I cover the shorter window cars, but the second one is relatively easy to pick out because it has 10 Ward vents. So it's from the 7984-series and the many smaller groups of cars that look identical.
To the best of my knowledge, the only train on the Highland with a heavyweight Smoker is 131/136. So I think that I can skip the 6700-series Standard Smoker. Otherwise it appears that I could reasonably expect to use some of the other three classes of cars that have taller windows.
Fortunately, modeling them isn't impossible. Nickel Plate Products imported brass heavyweights identified as O&W coaches (also available paired with a combine). These are a close match to the 7951- and 7984-series cars. They don't have any clerestory vents installed at all, which is great since I won't have to remove any. I'm hoping to build at least three cars within these series.
Being brass models, they are very basic shells. There's very little underbody detail, no interior, no window glazing, etc. So I'm hoping that I can modify the car sides to move the far right window further to the right to cover the not-rebuilt 7800-7950 series cars. Two or more of them would be great, but I'd settle for one.
An alternative would be to create new sides for the Atlas/ex-Branchline cars. These would be much better detailed (and I will see if I can fit the underframe into the brass model). I have a plan to try that as well, which involves a lot of pieces of styrene and many Archer rivets, or convincing a modeling buddy to 3D print them. But for now I think the brass ones are the quickest option.
Posted by Randy at 6:41 PM