This booklet tells the story in great detail of the old and new Yard Operations processes and paperwork. In my quest to better understand the the inner workings of  New Haven Railroad, this was the single most informative document I found regarding the paperwork and processes used in yard operations.
I've already told that story.
But there is more to the story of researching New Haven Yard Operations and the IBM-Teletype system. Such as, when was it placed into service?
Such records are probably long gone, so it's probably more a question of trying to narrow down the window of time. What clues did I have? 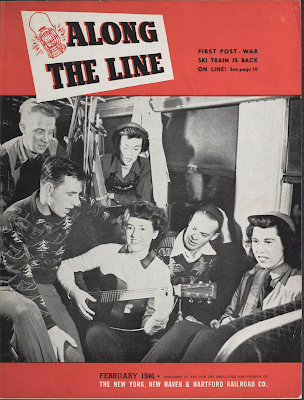 The Along the Line article from February, 1946 says that it is "already installed between Maybrook, Cedar Hill and the Car Service Office, the new procedures will be extended to Bay Ridge, Oak Point, Hartford, Springfield, Worcester, Northup Avenue, Framingham and Boston." 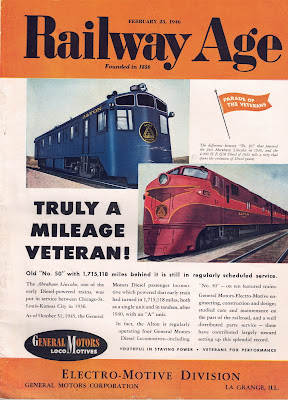 The February 23, 1946 issue of Railway Age has an article regarding the system, again only referencing Maybrook and Cedar Hill as being online. 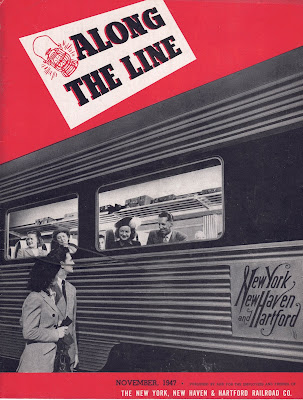 The system is also mentioned in another Along the Line article, from November, 1947. This also mentions the installation is only complete at Maybrook and Cedar Hill, and, "...we have been authorized to complete the installation between our other gateways and our important yards all over the system."
The IBM-Teletype booklet doesn't have a date printed on it. The text is a blend of the first Along the Line article and the Railway Age article, plus new text, but still only references Maybrook and Cedar Hill as being online. The exhibits have reproductions of actual railroad paperwork so we may be able to determine an approximate date from those. It has examples from 1942, '45, '46, '47, and the latest from January 30, 1948. With publishing lead times, perhaps mid-'48? 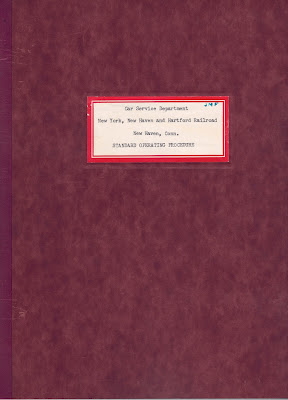 I also have the Standard Operating Procedure from the Car Service Department, from June 28, 1957. Although it doesn't specifically state it, it seems clear that the system is fully implemented by this time.
So that's a window from mid-'48 to mid-'57. The second Along the Line article also states, "...we started in January 1944...After much delay caused primarily by the shortage of critical materials we now have the system in operation between Maybrook, N.Y., and our largest classification yard, Cedar Hill at New Haven..." So it took about a year-and-a-half to get the initial installation completed.
So from a model standpoint, why does this matter?
In my case, I have trains originating at Maybrook, Cedar Hill, and Hartford. Chris has trains originating at Cedar Hill and Hartford. We know that by late '45 Maybrook and Cedar Hill were using the Teletype printed paperwork, so Wheel Reports (Outbound Consist Lists) for trains originating there will be in that format. But are trains from Hartford still using handwritten paperwork?
At this point I could reasonably guess that through at least mid-1948 Hartford was still using the old system and then pick a year to switch from handwritten to Teletype paperwork from that yard.

The Internet to the Rescue

And then, in my quest in the farthest reaches of the internet, I actually found an answer. In The National Railroad Adjustment Board Awards 5601 to 5700 Third Division. Huh? 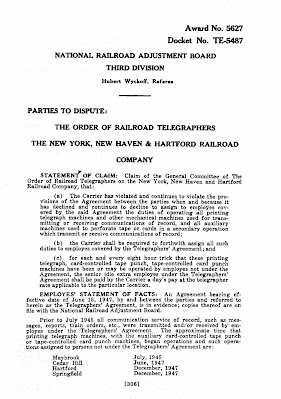 This is a book of railroad labor disputes and their settlements. And Docket No. TE-5487, settled with Award 5627 on January 23, 1952 lists the dates when the yards were actively using the new system.
The dispute was filed by The Order of Railroad Telegraphers against the New Haven Railroad claiming that since the new system used Telegraph Printers (Teletype machines), the terms of their collective bargaining agreement required that the machines be operated by Telegraphers and not clerks.
It states:

Prior to July 1945 all communication service of record...was transmitted and/or received by employes under the Telegraphers' Agreement. The approximate time that printing telegraph machines, with the auxiliary card-controlled tape punch or tape-controlled card punch machines, began operations and such operations assigned to persons not under the Telegraphers' Agreement are:

There are two interesting things in this list.
First, Bay Ridge and Northup Avenue aren't on it, even though they were to receive the system. Was it not implemented yet? Did they decide not to install it at all? Or was it simply missing from the list. Note that they also do not list the Car Service Office, which may or may not have had Telegraphers performing any of the work prior to this system. My assumption is that it had been installed, and they were just not listed as part of the complaint for some reason.
Second is the date listed for Cedar Hill. We know it was in operation by the end of 1945. So it appears that either the date is wrong, or that until June, 1947 Telegraphers were operating the machines at Cedar Hill.
It also provides a date for the IBM-Teletype booklet - October 21, 1947. But we know that it had examples of paperwork from January 30, 1948, so this obviously isn't quite correct. Perhaps it should have been listed as 1948?
So this would have been interesting enough, as is the case (spoiler alert - the Telegraphers lost). But no, it's better. Because it includes a full description of the process, again similar in content but different enough to answer a few questions. For example, concise descriptions of the different reports and their uses. Listed under the Carrier's Statement of Facts:

The dispute arise from the installation on Carrier's lines of a new technique for the preparation, use and handling of the following:

These reports are defined as follows:

(a) An interchange report is a list of cars received by a railroad from another connecting carrier at a junction point. It contains, among other things, the number and initial, contents, origin and destination of each car and serves as a record of the delivery and receipt of the car by the respective railroads.

(b) A switch list is prepared at a yard where trains are broken up and cars switched to classification or other tracks for assembly in different order into outgoing trains. It gives the information necessary to place each car in the train being broken up on the proper track in the yard.

(c) A wheel report is a list and description of the cars in train order given to the conductor of an outgoing train to enable proper handling of the cars enroute and to serve as a report of the work done by the train at the conclusion of the run.

(d) A train consist is a list and description of the cars in a train in the order in which they stand in the train. It is used by the yards at which it originates, through which it passes enroute, and at which it terminates, in handling the cars, in the preparation of the other documents listed above, and for other like purposes.

(e) A passing report is a list and description of the cars passing through a particular yard or junction point. It is used by traffic and other railroad offices in tracing shipments and advising consignor and consignee of the location and progress of their freight.

(g) A car record book is a list of all cars passing through a particular yard during a given period arranged as nearly as possible in car number order. It is used for information purposes at the yard in tracing the handling of particular cars through the yard and for locating underlying records evidencing such handling, such as the interchange, train consist, wheel report, and other documents.

The essential data with respect to the movement of loaded freight cars - the car initial and number, contents, type of car, weight, route, origin, shipper, consignee, destination and other clerical detail - is contained in the waybill prepared at the station where the movement originates. This document accompanies the car from origin to destination, in the possession of the freight train conductor enroute and of the yard forces at yards where trains are broken up and re-assembled. Without this document the car may not be moved. Because the waybill accompanies the car it is necessary that each office at terminals through which it moves abstract and transcribe from the waybill the data necessary for proper handling and for making proper reports. This work has always been done by yard employes represented by the Clerks' Brotherhood.

I haven't seen the various reports so clearly defined. Although terminology and actual processes will vary from road to road, this has clarified several things:
1. The Wheel Report (Outbound Consist List) is the working report of the conductor on the New Haven. It provides the information needed for working the train on the way. Because of other resources, we know the conductor can be given additional work along the way by Train Orders, and they will document those car movements on this report as well. While this isn't clearly evident in the couple of examples I have, it points me in the right direction.
2. Switch lists on the New Haven refer to documents provided to the yard switching crews.
3. Although I have seen them listed, I didn't know what a Passing Report was, or what it would be used for.
4. The Outbound Consist report replaces the Wheel Report that is provided to the conductor. Although the conductor still has to provide a record of work done during the run. Exactly what paperwork was used for this purpose remains a bit of a mystery, although I suspect it was still the old paperwork completely by hand by the conductor.
However, with the Teletype printed consist, did they only record additional movements by hand, or did they still transcribe the information from the Outbound Consist to their own Wheel Report? I suspect that this is the case, at least for local freights.
Still more to find, but at least I now know for ops sessions in 1946 and '47 that trains from Hartford will still have handwritten Wheel Reports, but Maybrook and Cedar Hill will have teletype Outbound Consist Reports. By 1948 all trains will be using teletype reports since Hartford was online by then.
Posted by Randy at 1:51 AM