Modeling buddy Bill Gill contacted me after he saw my post on rivets with yet another technique he has developed. I have to reiterate this is one of the main reasons I like blogging, getting new information, techniques, and ideas from others. It's also great to hear from Bill, who I first met at RPI, and with the current state of the layout still in limbo (plus the pandemic) I miss seeing him a few times a year.

This is an Athearn flat car he modified to match a D&H flat car for the NEB&W at RPI.

There are 2 replacement rivets over the grab iron, 8 rivets between the first two stake pockets, then vertical rivets (3, 4, 8, and 3) noted by the arrows. I have to say his are more precisely placed than mine are on the flat cars I just did...

Here's a look at the finished and weathered car with a marble load. 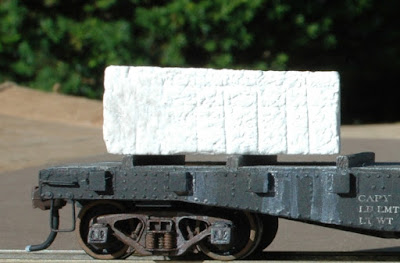 He never had luck with harvesting rivets, and the smallest Tichy ones are still quite large. At the time the Archer rivet spacings didn't match.
How did he do it? I'll let him tell you:

The rivets on these cars are tiny dots of thick cyanoacrylate applied to tiny needle pricks that located the precise spot for each rivet. I printed the patterns on  a piece of Scotch Magic tape and applied that to the side of the car to use as a guide for the needle marks. It took a little practice to get the feel for how much pressure to apply to the needle (held in pinvise) to get consistent size/depth, but that came quickly.

Then a bit of practice applying just the right amount of CA. A tiny dot of CA was picked up with the needle point and carefully lowered until just the bottom of the droplet touched the tiny divot.

If I got too much CA on a spot, a quick, flat scrape with tip of #11 blade removed it and I made another needle poke before trying again. It sounds more tedious than it is once you get the feel for it.

One improvement I made on later projects was to use JB Weld epoxy instead of CA. It has a much longer working time and was easier to wipe off when I goofed. It also settled better to a more uniform looking rivet head than the CA, which sometimes set pretty quickly.

I'd had a terrible time trying to harvest and use Athearn rivets, The smallest Tichy rivets were a lot bigger than the rivets on the Athearn flat cars I was trying to match and (at that time anyway) none of the Archer rivet spacings matched the Athearn spacing.

I got overly optimistic and tried this method for applying a double row of staggered rivets along the center of a tender's sides. Too many rivets to be absolutely consistent in size and spacing.

But I managed to gently scrape those off and sand away the needle marks with just a little work with 600+ grit wet dry paper. I then found some archer decals that worked ok although I wish they were just a tiny bit larger and kept the same spacing.

Thanks for the tip, and fantastic model work as always, Bill!