Last week I wrote about some information I found in documentation from a telegraphers' dispute with the railroad. It's a good example of being able to find useful information in unexpected places.

Don (signaldesign) posted lists of Public Railroad Crossings that the NH compiled on the NHRHTA Forum recently. I hadn't taken a look, since while seemingly interesting enough, I know where the grade crossings in New Britain are. But I knew I would want to grab it just to have the information.

What is helpful is that the date of installation of the automatic gates/signals is noted. 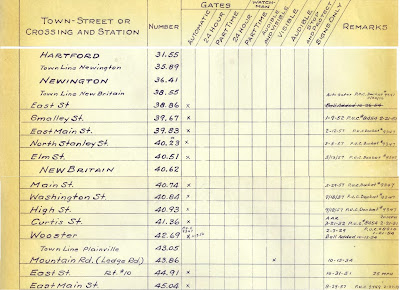 But, you say, that's information that is expected in a document like this. Very true, but it wasn't what I found most intriguing.
As I noted on Monday, I was working on a page for the New Hartford Local/New Hartford Line on the new site, so I decided to grab the list of crossings for that line. And what did I find?
Not only information on the crossings, as expected, but also when each section of the line was abandoned, including the number of the ICC docket of when the abandoned the section from Collinsville to New Hartford after the 1955 floods. That actual abandonment was a full year later. I haven't dug up the ICC docket yet (it doesn't look like it's online), but it's on my list now. 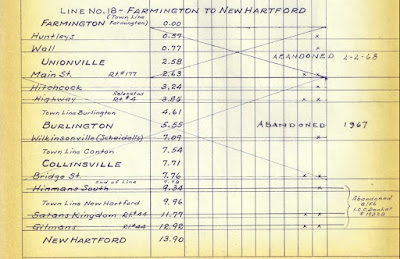 I had seen it reported that the line outlasted the New Haven, but it appears it was abandoned 10 months earlier, in February, 1968. The 1967 date of the section from Unionville to Collinsville makes sense, since Collins & Co closed in 1966. It looks like the traffic to Unionville wasn't enough to warrant maintaining the line at all.
Thanks again to Don for posting these on the forum.
Posted by Randy at 1:55 PM