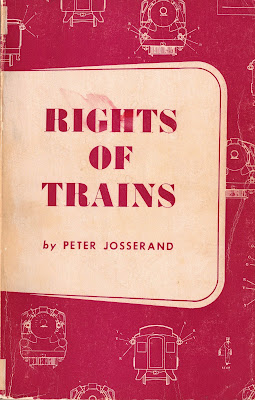 I have been reading through Rights of Trains by Peter Josserand, which is a fascinating book. I have the 1957 fifth (and possibly final?) edition. Peter was the Night Chief Dispatcher for the Western Pacific. The first edition of the book was originally published in 1904 by another Dispatcher, Harry W. Forman. It was updated in 1925 and both Harry and Peter are listed as authors, 1945, and 1951 and at some point Peter became the only author listed.

The format of the book changed quite significantly over the years though. As you can see in that first edition, it is focused on the examination for the rules, specifically the ARA Standard Code of Rules. As such, it's presented primarily as examination questions and their answers, with a copy of the Standard Rules at the end.

The 1957 edition, however, starts with the Standard Code of Rules (adopted 1949). The second portion, and bulk of the book, then looks at how the rules have been adopted for use on other roads. He lists 35 other roads that were studied as resources for this section of the book. In the process of comparing differences, it provides a lot of clarity on what the rules mean and why. Part III is the question and answer section, then a chapter on CTC and finally one on special instructions.

Suffice to say, if you want to understand how railroading under Time Table & Train Orders works this, along with a copy of your prototype's book of rules, is the place to start. I have a 1945 edition on the way to see how it compares with this one, and if there are enough differences I may look for the 1951 printing as well.

Reading through the book the first time immediately clarified some things, which made me look back at this post on several train orders.

The "Aha!" moment for me this time was: An Extra doesn't really "exist" without a train order. It also means, once it reaches the destination on its train order, it cannot operate until it receives additional orders. But orders could be provided at any Train Order Station on the way.

This seems simple enough, but it clarifies the way the rules work (at least for me). 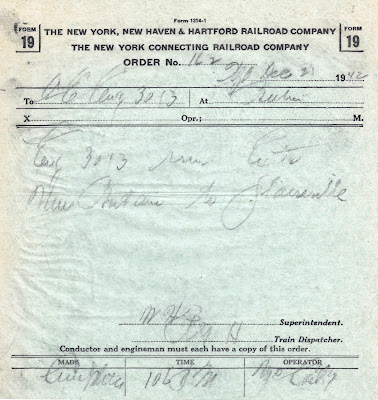 Once the train arrived in Berlin, the Dispatcher would know the state of the road from New Britain to Plainville. Remember that the train would be coming up the single-track Berlin Line, but then entering the double-track Highland Line in New Britain. So this order is indicating that the route is clear between New Britain and Plainville.

To get this order, the Train Order signal must have indicated there was an order. It's interesting because the station is past the south leg of the wye that would have been used by trains going to New Britain. The order could have been hooped up, so the Agent may have walked to the leg of the wye to give the orders and the crew could have seen the signal as they approached it.

Had this order not been given, it would have had to receive an order at New Britain. It's on Form 19, so the train wouldn't have to stop in either case, and just have it hooped up.

A later order the same day shows the reverse direction:

The train had orders to Berlin, but no further. I would guess it stopped on the wye track prior to entering the Springfield main track and received this order there. This gave it authority to run on the Springfield Line to North Haven.

The most important aspect of this to me is understanding how to incorporate it into movements on the layout. Some of the train orders list Berlin to New Britain, which means they would have to stop at New Britain to get further orders. One question is whether there was an Agent at Whiting St. Yard that could give orders to crews. I think the Employee Timetable makes it clear that it's at New Britain Station.

At New Britain, the Agent can hoop up orders for the crew. Since the majority of the trains during the day are passenger and scheduled, I won't need to prepare any orders for them. The switchers, of course, are operating within yard limits. So it's just a couple of freights, but it will still give the crews a taste of TT&TO operations.

I had also commented that the Train Order numbering didn't seem to follow the rule that orders started with No. 1 at midnight. For example, I have four orders for December 29, 1942:

The first two were written by Dispatcher RHC, and the second by EWR. Considering the time span, I figured they were different shifts. While that must have been true, what I didn't initially catch is that they were also from different divisions.

The two earliest orders were to run New Britain to Westfield, and New Britain to Plainville, which are in the Hartford Division, while the last two orders were to both to run Berlin to North Haven, which are the New Haven Division. Furthermore, while I don't have any evidence other than the Train Orders at this point, I think that the New Haven Division Train Orders started at "1" each day, and the Hartford Division Train Orders started with "101" each day. In other words, I don't think 108 orders had been written by 3.53 AM, only eight.

Order No. 162 is still interesting. Running from Cedar Hill to Plainville (at least) it would have most likely been NY-2 or NY-4, expected in Berlin around 3:00 am and 7:50 am respectively. I originally thought the order read 1.06 AM, but based on the order number I'm now thinking it is 1.06 PM. These trains were usually assigned a J-1.