More from Along the Line. I intended to cover several issues, but the July-August 1948 issue has a lot of articles that I find interesting and have tidbits of information that could be useful for modelers. Whenever possible, I look for primary sources published in the era like this. It's still listed as monthly, but we're in a period where that regularity is in flux again... 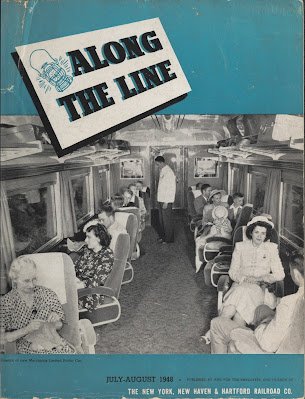 So what's in this issue?
It starts with a letter from Howard S Palmer announcing his retirement on August 12 as the President of the New Haven Railroad.

A long and interesting article about how the NH operates and lots of statistics such as the average number of cars per freight train: Class I roads - 53; NH - 54. Or that LCL on the NH accounts for 20% of freight revenue, compared with a 9% average for all Class I roads. They also cite a 2:1 ratio for loads in vs. out. 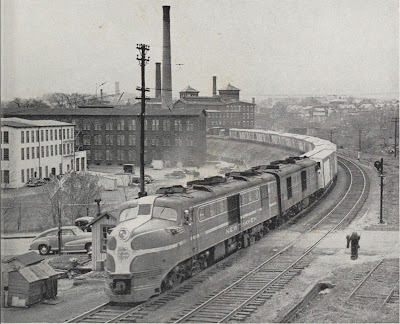 Twin-unit Diesels hauling the first section of Ringling Brothers and Barnum & Bailey Circus from Harlem River to the Boston Garden. This photo was taken in Woonsocket by a staff photographer of the Woonsocket Call.
A report on the circus trains that have traversed the New Haven during 1948.
Note that circuses were usually one-day events, occasionally two. They could pack up after a show, travel by train overnight, and be ready for an afternoon show the next day.

Carnivals typically ran for a week, with Sunday as a travel/setup day, but some were shorter.
In addition, I know that Coleman Brothers was in New Britain May 3-8, the Hunt Brothers Circus on June 11, 1948, John H Marks Shows June 14-19. They all had other shows in NH territory that season, although they may not have traveled by rail.
Apparently Hunt Brothers didn't have a great show in New Britain or Bristol. From The Billboard 6/26/48:

Weather, Opposition Hurt Hunt Bros.' Org in Conn. NEW BRITAIN, Conn., June 19.- Too much opposition, in the form of threatening weather and the prox- imity of Ringling Bros. and Barnum & Bailey, hurt biz for the Hunt Bros.' org here and in Bristol. Hunt played to half houses at both performances here Friday (11), large- ly, it is believed, because the Big One was due to show in nearby Plainville one week later. Rains for several days before org appeared in Bristol (10) cut attendance at the matinee, but a strong house was on hand for the evening show.

James E Strates Shows was in New Britain in 1949 (June 6-11), along with Ross Manning Shows (July 11-16), and Coleman Brothers (July 17-23).
The Ringling Bros dates are taken from the Circus History site.
You'll note that Ringling Bros, B&B is not playing in Hartford. After the 1944 fire, they didn't return to Hartford until long after the New Haven days, and 1948 was the first year they booked any shows in CT.
The New Britain stand for Ringling Brothers is listed in the article, but isn't on the Ringling Brothers route. I found this in the 5/22/48 issue of The Billboard Magazine:

R -B New Britain Lot Nixed NEW BRITAIN, Conn., May 15.- There is a possibility that the Ring - ling- Barnum circus may have to cancel its scheduled June 17 appearance here. Frank A. Starkel, State police fire marshal, has declared the lot on South Main Street selected by the circus "unsuitable and rejected."

It appears it was moved to Waterbury instead for the 1948 season, as that's what's listed in their route.
The Plainville 1948 show was a success. From the 7/3/48 issue of The Billboard:

Prime Territory The route the Big Show is now making is the same fought for annually by every big rail org in the country in the heyday of the circus with the best biz naturally going to the first in. Friday (18) at Plainville, Conn., a town of 10,000 several miles distant from New Britain and Hartford, the circus played to two turn away crowds. Indications were that it would easily have been worth a two day stand. The entire community was disrupted, but not unhappily so, by the influx of sightseers, necessitating an all-night tour of the regular police force plus many special officers. The show set up on a near-perfect grounds, Tinty's Flying Ranch. The shortage of working help continues acute. The circus management reportedly is offering extra help $3 to $4, three meals, and free tickets to both the big top and the Side Show in return for helping to get it up and down. 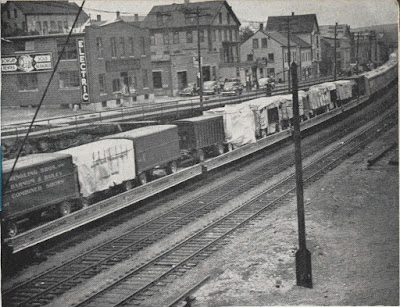 Second section of the Ringling Brothers and Barnum & Bailey Circus moving over the Providence-Worcester branch. This section contains the many circus "props" and 14 sleeping cars. The circus train is en route to Worcester
Circus Trains seem to have lost favor in the modeling community as gimmicky. But the reality is, there were a lot of circus/carnival trains in this era, and even more pre-Depression if you're modeling that early. Although from a scenic standpoint my layout will be the first Monday in November, I may eventually build a circus or carnival train (or two) for the occasional summer session. They also make beautiful shelf displays when not running on the layout.

The Engine Dispatcher makes sure they are on hand to operate our trains...

An interesting article about a job I hadn't really considered existing. They call the engineers, firemen and hostlers, including from the spare board if needed. They also assign the motive power.

The May-June issue had an article on the Crew Dispatcher, although I wouldn't have gathered that they are responsible for all of the train crews except engineers, firemen or hostlers. Otherwise the article primarily covers the complexity of managing a huge pool of employees, and the process of calling them to duty.

At Boston, Providence, Cedar Hill, Harlem River, Grand Central, Maybrook, Danbury, Waterbury, Hartford and New London, where locomotives return to the enginehouse for inspection and maintenance, the Enginehouse Foreman keeps the Engine Dispatcher informed as to when each locomotive is ready for the next run. They also have to ensure enough units are assigned for the load.

Crews on the spare board are first in, first out, but the Engine Dispatcher must know who is qualified for specific type of locomotive and the line. In addition, there are three levels of qualification for engineers and two for firemen. Freight and yard, local passenger (after 1 year), then all type of trains for an engineer (after 18-24 months). Firemen receive their First Class certificate after 15 years of experience.

It would be rare for a layout to require somebody to handle just this job (and probably a bit boring too), but it could be something that a Dispatcher/Agent could handle. I like this idea better than the Yardmaster assigning or choosing locomotives because it feels more prototypical. We obviously need to combine jobs on the model, but I think some combinations are better than others.

But I'm more interested in the information about different levels of qualification, and am considering some sort of system on my layout. It won't be as rigid as the prototype, obviously, and will also depend on who is there. But by having fully qualified conductors on a given job, I know that they'll be able to help the less experienced crew assigned as engineers.

But consider a different scenario. Chris, Dale and I like to have the momentum very high on our locomotives. But not all operators are familiar with that approach, and some just don't like it. The Dispatcher could have a notation of these preferences (qualifications) and when it's time to assign power to a train, they can take this preference into account.
This could be much like the prototype in the transition era, too. Not everybody was qualified on steam, and that may be the case on your layout as well.
There are other aspects that you could incorporate as well. To start with, it's not uncommon for trains to run late on a model railroad. Inspections and maintenance take time, and you could take that into account when assigning locomotives. On the NH, most trains have assigned locomotives, and the inspection/maintenance is factored into those assignments. But trains running late, or mechanical problems, affect that. There are a number of ways that could be simulated on your layout without greatly complicating things.

An article detailing the new stainless steel parlor cars, the first delivered on June 4, and the rest by the end of August.

An article on Stanley Home Products. No, not Stanley Works in New Britain, but a company in Easthampton, MA. A company that sells via home parties, they provide entertainment (a magic show, singing, a bit of vaudeville, etc.) and the host sells the products. Headquartered in Westfield, but their plant is in Easthampton.
This is great information for me when setting up waybills for the NY/YN freights. I just wish they had published a lot more of these types of articles. Some of these would probably route B&A at Westfield, or B&M at Northampton. But cars would route over the New Haven and through New Britain.

An article about marketing passenger service. There is also a list of all of the trains that are assigned the 8600-series stainless steel coaches at that time.
And that's it for this issue. 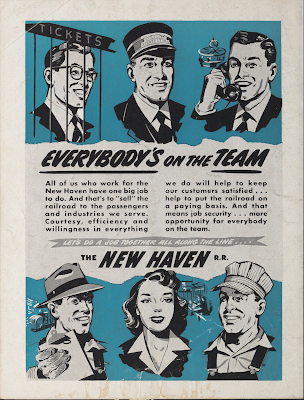 Email ThisBlogThis!Share to TwitterShare to FacebookShare to Pinterest
Labels: Along the Line, Operations, Prototype, Research