I moved the spray booth back to where I originally planned, under the west end of the layout: 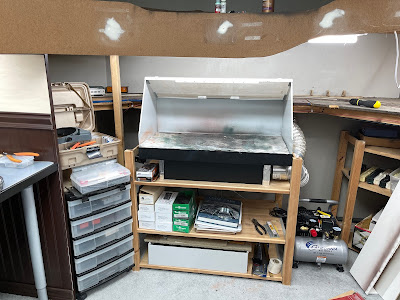 I had moved it to where Whiting Street is, and vented it through the old dryer vent. But since I built the backdrop only 2" off of the concrete wall, it's not thick enough to accommodate the flexible vent anymore. Here I have it running up through the wall and out the window: 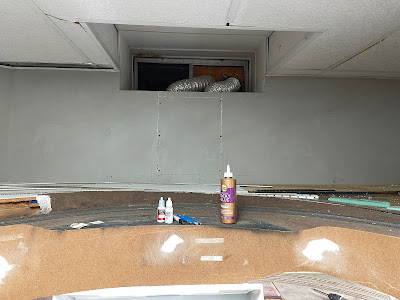 As you can see, the booth has two fans, and two vents. Fortunately, I hadn't bothered taking this down when I moved the booth. One of the reasons I moved it was to provide desk space for the crews here. But they can use the booth for their paperwork just as easily, along with the other half of the agent's desk next to it. The bad patch job used to be behind the backdrop, so I'll have to finish that repair.
The refreshments (and bar) move to under Whiting St.
The compressor was a Christmas present, and is the same one Bill S. recently got and recommended. This all fits quite well, and accessing the two turnouts behind it isn't that difficult either. Lighting, of course, is great, and I think I may add a second one further back because the booth has a clear plexiglass top to allow a light to be used inside the booth too.
The booth itself was made by Artograph, and I did a lot of research before I purchased it years ago.  It has only seen a little use, but I'm sure that will change. Micro-Mark sold their own brand of the same one, but I paid a whole lot less than they want for it. I'm pretty sure it's out of production altogether, though, and now I'm having trouble finding the filters. It uses three, a think pre-filter which you used to be able to buy as a roll and would come through a slot in the back, plus a regular filter that other booths use, and a third layer that also looks like a pretty common material, even if I'll have to cut my own. There was a 20" wide version, but this is the 30" because I figured I might be doing buildings and other larger items at some point.
Next to it is a Flambeau tackle box from Walmart, that I purchased when I was building Harvey's layout. It has 5 multicompartment storage boxes which I have organized for various small parts, plus a good size open compartment for tools.
The storage drawers are just a basic plastic mobile storage unit, purchased from Wal Mart probably 20 years ago, but there are always similar ones available. These right half of the agent's desk is where I do my modeling now, so this unit and ready access to the spray booth will work well going forward I think.
The shelving, of course, is (at least 3 generations of) Ikea Ivar shelving that I've been using for years.
This is all part of finding a home for everything that doesn't currently have one, which is critical when living in a small house.
Posted by Randy at 8:24 PM