Dick came by to help design and build a bridge for the bulk tracks behind the freight house.

Here's a map to explain the layout of tracks: 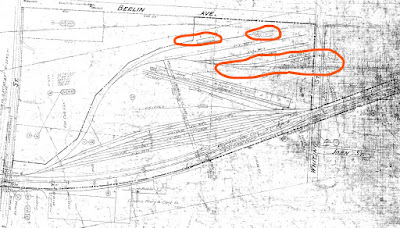 The large oval highlights the two bulk (team) tracks, along with a track to Stanley Rule and Level that crosses Whiting St. Also note the crane.
The two smaller ovals are two unloading platforms. Since I can't model all of these tracks, I'll probably add one to this section.
You can see how the bulk tracks are behind the freight house, with a parking lot between them. On the layout, the freight house will be along the edge of Whiting St. Yard, and (most of) the parking will be in the aisle. The bulk tracks are on a small shelf built into the wall. To get there, I need a bridge.
Here's a shot with the Whiting St Yard benchwork to the left, and the bulk track shelf on the right. 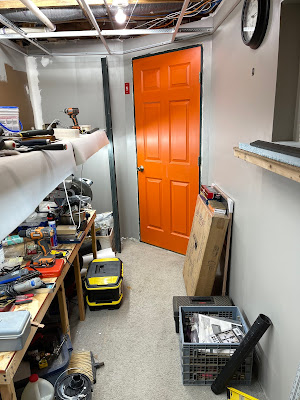 My initial thought was to build a swing bridge that would hinge out from the wall. The problem is that it needs to be longer than the length of that wall, by about 4-6 inches. That's OK, because I would like to extend the layout about another 4-6" to provide a little of the parking, and maybe have some trucks at the freight house, which parallels the edge of the benchwork.
However, Dick's initial thought was to attach it to the front of the benchwork. This sounded like a good idea, since it would be as long as needed, but I wanted to do it in a way that it is hidden when not in use, rather than the track being alongside the freight house. To do this, it would need to go down a slight grade to ensure that the top of the bridge was low enough that I can build out a small section of benchwork to cover it when stored. This amounts to about 1/2", and conveniently, that track is just long enough that it's a 2% grade to get to that point.
Although not prototypical, the property wasn't entirely flat either, rising to the right of this track anyway. When scenicked I think it will look good. 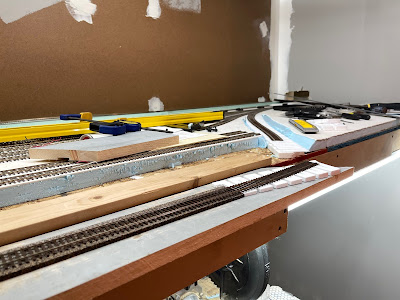 The bridge is a simple T-Beam. Dick routed out a slot for the vertical member, and we used a door hinge to attach it to the layout. I cut out the foam where the bulk track is, and used Woodland Scenics 2% grade (on top of a W-S 1/2" spacer). I also cut out the foam from the front house track to the edge of the benchwork so I can attach the extension that will hide the track securely to the existing benchwork. It will be a piece of OSB that simply extends out about 5" to cover the bridge when stowed.
Here's the bridge extended: 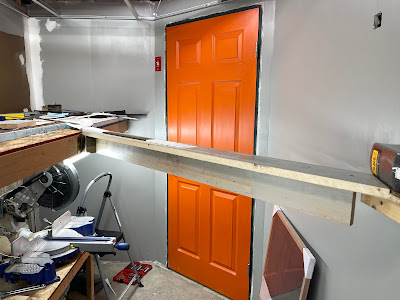 Very simple once we determined the angles. We started by cutting the vertical member to length and attaching that to the benchwork. Then we laid the other board across the top and marked the angles to be cut. It took us longer to work out specific details than it did to actually build it.
Because we couldn't open it a full 90-degrees, we drilled holes in the fascia first, then used machine screws and nuts to attach it. We had to attach a block to the side of the vertical member so the hinge would be along the side, permitting it to hinge flush against the benchwork. I will probably devise a closing mechanism with magnets to hold it in place when in use. The electrical bus will be attached on the hinge side with feeders to the track, and I already have a bus to the shelf. 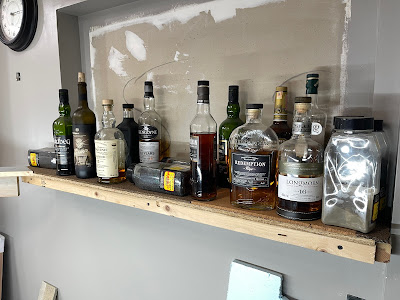 As it turns out, cork, plus a layer of the craft foam to be added later, is the perfect match to the end of the bridge. I needed some weights for while the glue dried...
The track to Stanley Rule and Level will run against the front of this shelf, and end at the edge. There will be a track over at Stanley for scenic purposes, since I can't actually connect the two.
While I could have just used the track that ended at the front of the layout for the same purpose, I think having a couple of the bulk tracks themselves will be a nice addition. The bridge will most likely be extended once or twice a session, just long enough to service the tracks, so it doesn't need to be more complicated than this. The extension to the benchwork will also help protect the freight house. While it does extend the reach, the majority (if not all) of the access that will be needed is at either end of the yard, not in the middle here. The Landers, Frary and Clark track may be a challenge, though. I guess that's consistent, though, since the Landers track at New Britain Yard is too.
Posted by Randy at 9:57 PM