What else am I working on? Lots of small projects

Most of my recent modeling hasn't been that post-worthy. Gluing down track, etc., and I've had a lot more research/computer time recently (thus all the posts on commodities), but I wanted to keep up with the modeling posts too.

I did spend a couple of evenings de-flashing 7 resin hopper kits worth of parts. The top box is 3 kits, and each of the other boxes two additional kits, each box being a different prototype. 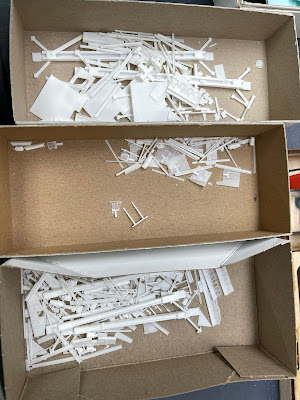 I have 6 more to go. I'm kind of making a habit of this when I have some spare time that's not long enough for another project. I have already cleaned the flash off of the hopper bodies, and also drilled holes. So I'll be ready to do a push to finish assembling them once I've gathered the prototype material and made sure I have trucks for them.

I also added a couple more short staging tracks behind the Agent's desk where I realized I had some space (and a couple of spare turnouts): 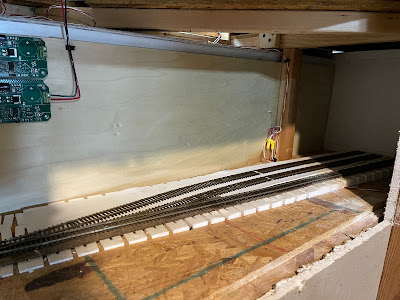 These will be used for parking locomotives not used in a given session. I'd like to have enough tracks to store all of the locomotives on the layout to minimize handling. I will probably install switches to cut power to the tracks when not used.
I also noticed that the couplers sat a little high on the RS-2s. So I used a red Kadee washer to lower them. 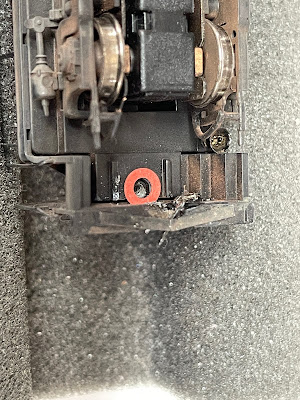 This required filing down a small amount of the pointed portion of the steam line doors. 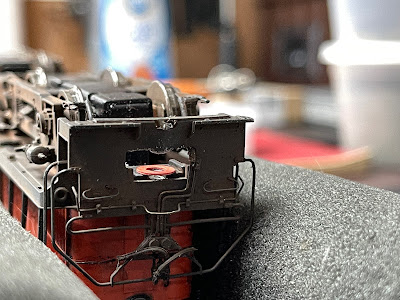 I completed relaying the mainline and Track No. 5 around the back corner where I had taken them up for some work. I wanted the tracks closer together along the straight section to provide more room for the eventual Union Manufacturing building. 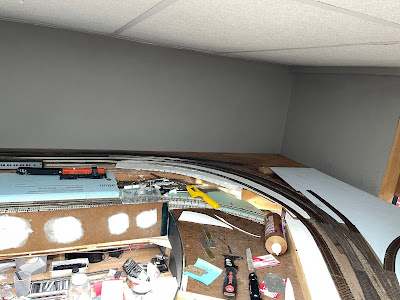 The front track (eastbound main) proved a bit more problematic to get right, and once I did I decided not to try to adjust the curvature of the other tracks to be closer here. It will be pretty well hidden by buildings anyway and I can work with it scenically. The key is that it must operate properly.

I had considered installing a track for Skinner Chuck Co. on the inside of this curve (the only major industry missing), but it really just won't fit. This entire section should be on a broad curve going the other direction, but the basement wall got in the way...

The light blue masonite has two new industries, North & Judd storage, and P&F Corbin coal track, so I'm glad I was able to add those. The rest of the work on Track No. 5 will wait, because I want to use the forthcoming Fast Tracks Diamond Line crossing once they are available. They look amazing. I'm also considering hand laying the turnout at the end of Track No. 5, which is currently a curved Walthers turnout.

The rest of the work has been continuing to rearrange the basement and find homes for everything, final tweaks on trackwork and dropping feeders. I'll spend a day (hopefully with Chris' help) soldering them all to the rail, since that's easier with two people for a lot of these locations. I'm really not that far from having a fully operational layout again, and that's a priority.