Research - The State of the Railroad

Poking around through more copies of Along the Line, and I came across this article from August, 1949. Like so many "known" facts, I find that with a little research that things aren't quite what has been passed along through the years. This is the second "relaunch" of the magazine, this time in a smaller format, after missing five months. 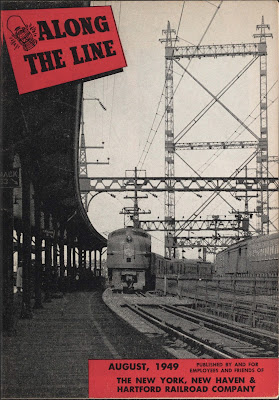 More than five thousand new jobs were created during the years 1947 and 1948 through the location of new industries along the line of The New Haven Railroad, it was revealed recently by figures compiled by our Industrial Development Department.
During those two years twenty-nine new industries came into our territory from previous locations elsewhere, and a total of 134 new industries started in business here, including new branches of existing industries. Only eight industries moved to other locations during the same period, and only fourteen went out of business.

Translating this added number of employees into terms of purchasing power, it is readily seen how great were the benefits to the communities. Figuring a conservative average of $40. a week earnings for these new employees, this meant a total additional payroll of $10,493,600 annually. It meant more trade for the butcher, the grocer, the clothier, the electric light and gas companies, the telephone company, and everybody else in business in the territory. It meant more tax collections for the support of government.

Their food bill alone would be over $3,000,000. Housing and fuel expenditures would be more than a million and a half dollars. They would spend well over a million dollars for clothing, better than $600,000 for household furnishings, and another $400,000 for household operations. Automobiles, entertainment, medical care and other items would run over two millions.

Interesting, too, is the diversity of products turned out by these new industries. The greater the diversity of manufacture in a given territory, the less is the likelihood of disastrous results from untoward conditions affecting a particular type of industry. Diversity is good "insurance."

Industrial development work began on the New Haven away back in 1911, when, in cooperation with the Boston & Maine, the first railroad industrial development activities were organized. This pioneering produced such excellent results that soon power companies followed the railroads' example, and this was fallowed in turn by greater activity by local chambers of commerce and similar organizations.

This is also the issue announcing the launch of the Cranberry, plus faster service for a lot of trains, many from 5-10 minutes, but the Colonial's running time has been shaved by 45 minutes. The Merchants also gains coaches during the summer months for the first time.

It seems that things aren't quite in the decline that most attribute to the post-war era. To be sure, we do see a decline in the next few years, with a brief boost from the Korean war, but in this period where the railroad has just come out of bankruptcy looks like things are going well.

Lastly, there's a letter from News Syndicate, Inc. referring to damage to newsprint paper rolls, and the reminder that there is a growing option of having the newsprint shipped via water routes. The author says he was a railroad man who worked the spare board for a decade and would like to see the business stay with the railroad.

As interesting as the letter is, it's the statistics that he quotes that interests me: they receive 600 carloads/month of newsprint.

This is New York City, so they may receive it from several railroads. I don't have the 1% waybill statistics for New York (much less the city), but that's 7,200 carloads a year, and more than double the average delivered to CT 1950-1954.

Email ThisBlogThis!Share to TwitterShare to FacebookShare to Pinterest
Labels: Along the Line, Prototype, Research