Designing Operations for Paul's Layout Part I - Setting the Stage

One of the reasons why I blog is because I figure if I've come across something that interests me, that somebody else might find it of value as well. Recently Paul, a fellow New Haven modeler in N-scale, saw one of my clinics on operations and reached out to see if I could help with setting up operations on his layout. Of course I'm happy to. This will be a short series of posts on designing operations for Paul's layout.

This ended up being a very interesting exercise, because the layout is complete and fully scenicked. So there won't be any changes to the layout itself. They have recently downsized, so finding a place for his O-scale models was out. In the end, the best space he could find was the laundry closet. So N-scale it is.

Here's a panorama of the entire layout:

And a closer look in sections: 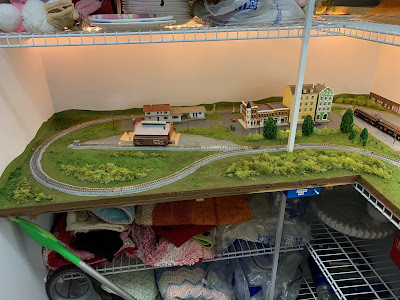 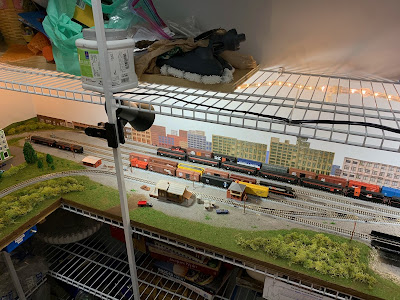 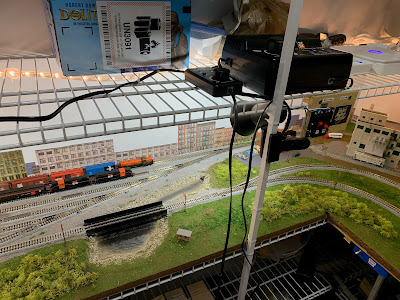 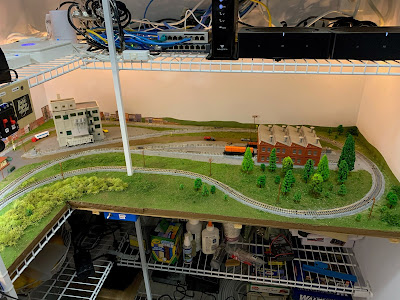 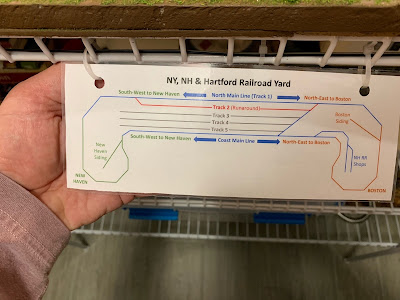 As you can see, the layout is a dogbone, with a yard built between the two sides. There's a single industry at either end, and regardless of the direction, one is trailing point and one is facing point. There are also two tracks for an engine house.

An initial reaction might be that there is very little to work with. A single industry to work in each direction, one runaround, and four yard tracks. I would have liked to see an actual yard lead, instead of having to use the main.

I'm on a lot of Facebook Groups, and I see a lot of 4'x8' layouts, most of which obviously consist of one or more loops, with some industries or yard tracks in the middle. And I see a lot of other folks with the opinion that they can't be operated, or at least not prototypically.

While you can certainly plan ahead for a layout that will be designed specifically for operations, I'm also not going to put down somebody's efforts and layout.  Heck, my layout isn't even running right now, and I barely have any scenery after a decade of building it. Who am I to judge?

I'd go so far to say that with a well designed operating scheme, you can make a layout feel more prototypical, even when limited to a loop in a small space. So can I design a relatively prototypical operation with this layout? I think so. I'm going to try anyway.

The first thing I needed to get a handle on here was what options we have for just running trains. The loop is what threw me, since I'm not used to working with that design. At least not since high school, and I wasn't doing any operations then.

Obviously a train can run in either direction around the loop. It would only be able to service one of the industries, unless it uses the runaround to handle the facing point switch. Trains that start running westbound (left on the North Main Line) can service the New Haven Siding, then use the Yard Track as a reversing loop, so they can service the Boston industry.

Next I have to get a handle of what I'm trying to design. The layout is in a closet, and it's DC. So I'm going to start with the assumption it's a single-operator layout.

He has a few blocks so he can park trains if needed while running trains in other sections. That will provide some flexibility. We might need to create additional blocks as we operate the layout, we'll have to see.

He's got a passenger train, a freight train, and several additional locomotives.

But servicing 1-2 industries doesn't do much and would be a very short operating session. Plus, it doesn't utilize the yard much. What can we do with that?

The Yard Lead also forms a reverse loop on the right side (labeled Boston) on the layout, but it only works in one direction. Once you've reversed the train, you can't reverse it back without a runaround move.

Labeling the Tracks
The only concern I have to start is that the front and back main line tracks are both labeled with east to the right. But since it's a loop, the front will be the reverse of the back. Because of the orientation of the yard, I will use the rear (North) main as the main line. So to the right on the rear track is east, to the left is west. When trains are running, the front will be the reverse. Note that I'm also eliminating the south/north designations, we'll just be talking railroad east and west.
That should be enough to get started. Next time we'll look at what I can come up with for actual operations.
Posted by Randy at 7:52 PM