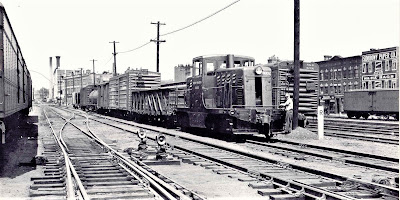 A picture I've posted a number of times, taken by Jim Karl in 1949. The last car in the consist is a covered hopper. I was wondering (once again) what might be in this covered hopper, since there isn't an industry in New Britain that would be receiving bulk cement. This car is clearly being switched since it's the DEY-4 (44-tonner) doing the work, so it was for someplace in New Britain.

On Bill's model of Livingston Manor he had learned that there was a cement company that received portland cement in covered hoppers. It was nothing more than a short trestle that allowed the O&W to drop the load directly into dump trucks. So it could still be cement, and unloaded where a conveyor could load it into trucks, for example.

Cement would be the most common load in covered hoppers on through trains as well. So what models are available that I could use?

Looking at the 1% waybill study, about 1/3 of the portland cement from from NY, and 2/3 from PA. There are a number of models available that would be appropriate for those regions. The obvious place to start is the Intermountain model (with the same prototype being produced by Bowser, Eastern Car Works, and Kato in the past). Of the roads offered, I'll plan on:

Note that the D&H, NH, and LNE cars were all built by Pullman Standard and have a different hatch latching mechanism than the models (it should be "type 1c"). I've got a bunch of parts to experiment with modeling this more accurately. Unfortunately, it's not the "type 3" version offered by Yarmouth Model Works (Kit YMW 103). The New Haven car is also a slightly later lettering scheme than I will need.

Other models I have that are also good:

F&C has also released resin kits of a lot of other covered hoppers, many of which would be appropriate for me:

Atlas has also announced a run of some of the Canadian "slab side" covered hoppers we did at True Line Trains. I have a couple of them naturally, but I think it's probably unlikely that such cars would be common on the NH. F&C also has models of some of these cars.

While cement is the most common load in covered hoppers in my era, it's not the only one. In researching other potential loads, I found that there are several related commodities that were common ladings. Bauxite, alumina, and aluminum silicate. Other than for aluminum products themselves, since I'm not familiar with their uses, I looked them up.

Bauxite is the stone that aluminum is mined from.

Alumina is basically powdered aluminum separated from the bauxite. Although it has many uses, one of its common uses is as an abrasive, in sandpaper as well as cutting disks, etc. So I'm wondering if it might be used at Stanley Works or the other hardware companies.

I also found that aluminum silicate is a common ingredient in porcelain insulators. I also noticed that General Electric leased a number of covered hoppers. That got me wondering whether the GE plant in Plainville would receive them. Apparently that location was originally Trumbull Electric Co, taken over by GE, and manufactured porcelain fixtures, switchboards and panels, among other things.

So add another Intermountain option:

Of course, that means I need to determine where such commodities would be sourced.

This lead to some interesting resources, such as this 1967 US Government report on Bauxite Reserves and Potential Aluminum Resources of the World. It's primary sources in North America are Arkansas, and to a lesser degree Alabama and Georgia in the southeast, and Oregon and Portland in the northwest.

Looking through my copy of the 1948 Rand McNally Railroad Atlas and aided with Google maps, I looked for the locations noted in the report to determine what railroads served them.

The general region on the map would also include MP, RI, SLSW, and SL-SF. The Intermountain Rock Island covered hopper is stenciled, "When empty return to Bauxite Ark."

Quite a few railroads over that area which would allow quite an interesting mix of cars. So let's check the 1% waybill study for cars inbound to CT to get a mix.

Aluminum Ore is listed, would that be correct?

Checking the AAR Commodity List, 311 Aluminum Ore and Concentrates includes alumina, aluminum ore, bauxites or, bauxite ore concentrates, and bauxite. Aluminum silicate isn't noted by name, but this looks like the proper category since there are no aluminum based products listed under 399 Products of Mines, N.O.S.

And where did it come from?

OK, digging through some more resources like this and this. Under the heading How is Aluminum Made? on the second page it notes. "There are no bauxite mines in Canada." However, processing the bauxite takes a lot of electricity, so the processing plants are often built where electricity is cheaper, such as large rivers.

So in Canada in my era Canadian alumina and aluminum silicate is all processed by the Aluminum Company of Canada in Arvida, Shawinigan, Beauharnois, and La Tuque, Canada, via the CN or CP. The True Line (now Atlas) slab side hopper models would be appropriate. Both CN and CP had cars appropriate for my era:

Many roads served East St Louis, including B&O, CB&Q, IC, L&N, NYC (Big Four), and many others. Again, Intermountain makes cars for many of the appropriate roads:

The variations of hatch latching mechanisms, along with pretty much everything else to know about the ACF-Design 1,958 Cu Ft 70-ton covered hoppers that are the basis of the Intermountain models is detailed in Railway Prototype Cyclopedia volumes 27, 28, and 30.

Note that a number of the roads have more than one group of these covered hoppers, often with different mechanisms, or closed instead of open sides. Where possible, Intermountain appears to have only used the number groups that have the "type 1" mechanisms. Only when a road doesn't have that particular mechanism does it appear they have lettered the car without regard to the mechanism.

By chance I happen to already own one lettered for Aluminum Ore company, plus a CB&Q, and WAB car from Intermountain. Lucky guess!

Kaolin is a type of clay used in the papermaking industry for finishing glossy papers. So cars with this commodity are appropriate for Holyoke. Nine cars owned by SHPX were built in 1940 and leased to Edgar Brothers Co of Metuchen, NJ (25051-25059). These cars had "type 1" mechanisms and open sides and are a match for the Intermountain model, although they haven't released this scheme.

Where did Kaolin come from? It's part of 323 Clay and Bentonite, which came from quite a few locations across the country to CT:

Edgar Brothers was based in NJ, but also mined in Edgar, FL. So these would be appropriate cars. It appears Georgia is the largest producer. I've also learned that Kaolin is often shipped as a slurry in tank cars, so that's another possibility. But since the Edgar Brothers were prototype cars, I may see if I can get some decals produced for them (or maybe Intermountain will add the scheme to their line).

Edgar Brothers also sold sand. A lot of the bulk sand sent to CT would have been used by the railroad. It would also have been shipped in bags in box car. But with an average of 1,250 cars annually, there would certainly be covered hoppers in the mix by this era. Two-thirds of this was from NJ, the rest from NY, except for a small amount (25 carloads) from Illinois. All of the local roads noted before, plus the Edgar Bros SHPX cars, would cover this traffic.

Food commodities are common today, but even in my era malted barley, flour, sodium bicarbonate, and granulated sugar were shipped in covered hoppers, although I can't think of any bulk customers that would result in such loads running through New Britain.

The same applies for fertilizer, powdered gypsum (although US Gypsum did have plants on the NH), potash, limestone, zinc oxide, etc.

Carbon black was another common commodity in covered hoppers, and while there were tire plants in CT, once again I don't think the cars would be running through New Britain. Rail Shop made a Carbon Black car (and a PRR H30 kit) but they don't seem to have an active website anymore. I have some of the Carbon Black cars and may be able to justify a car on a through train.

Kimberly-Clark leased cars from SHPX and they were based in New Milford. I'm not sure what commodity they were used for, but they would be very appropriate for somebody modeling the Berkshire line, but not coming through New Britain unfortunately (cars destined for the Berkshire from Springfield are routed through Cedar Hill).

Overall, covered hoppers won't be a common car delivered to New Britain, but as the photo shows they are receiving some in my era. Cars on their way to Hartford, Plainville or Holyoke are certainly appropriate, though, and with a greater variety than I originally thought.