I've been working through compiling more data from the 1% Waybill Analyses from my era. I find this sort of thing quite interesting. I've posted links in the right column for several of them hosted at Hathitrust. If you are using the mobile version of the site, click 'view web version' at the bottom of the page to see that column.

I think it's important to understand what this data is, and what it isn't.

First off, there are a lot of books/documents that were generated from this data. The links I provided include the state to state traffic of carloads for each commodity class. These are the classes from the AAR Freight Commodity Classification book I mentioned in a prior post.

There are territorial studies along with others, but my interest is in the origin of traffic to CT, and the destination of traffic from CT.

To put it a different way, the fewer loads of a commodity, the less accurate the data is. The number of carloads reported in the CT data is frequently less than 5. Since this is 1%, it represents less than 500 carloads. However, it's quite possible that an unusual shipment was made, and that happened to be the one waybill recorded. That one load would now be considered 100 loads.

Less frequent loads may have been missed entirely as well. Despite these potential issues, the data itself is quite useful.

To give you an idea of the sort of thing that I think you can derive from the data, here's an interesting example.

This is the entire list of car movements for 739 Luggage and handbags, NOS (not otherwise specified)

Roughly 100 carloads a year are shipped from CT to GA, NY, TN, TX, and VA, and also from VA to CA, NY, TN, and VA.
How can we make sense of this?
I checked the Industrial Directory of CT, 1947, and I didn't find any luggage manufacturers. But I did find that there is a large number of handbag manufacturers in the S. Norwalk, Norwalk, and Stamford region. There are 18 companies with 1-50 employees and 5 with 51-200 employees manufacturing handbags. I had no idea.
What about Virginia, then? Here's an interesting blurb about the Virginia Trunk & Bag Co. Apparently Petersburg, VA was a center for manufacture of trunks and valises(?). According to Dictionary.com it's a small traveling bag or suitcase. Here's info on the Seward Trunk & Bag Co. So that confirms that VA was a source for luggage of various types.
But that still only accounts for about 400 carloads in 1949, to only four states. Looking from a different perspective, where were major luggage manufacturers? Samsonite was based in Denver, and had a plant in PA. Shouldn't they be represented too?
Hmm, let's look for other clues. Looking at another commodity, 200 Hardware NOS, I thought the number of carloads (700) and number of destinations from CT, just five states (AZ, CA, IL, NY, and OH) unexpected, considering that New Britain produces as much as 20%+ of the world's hardware in this era. Shouldn't there be more cars, or at least more destinations? Not all of the hardware would ship from New Britain, of course, but that's only around 2 cars/daily and I suspect Stanley Works alone was much higher than that.
What have we learned?
What could explain this? Is the 1% waybill analysis wrong? No, I don't think it is. Here's what I think we're seeing:
Can we confirm this suspicion?
In the Along the Line article about Landers, Frary & Clark, they highlight their postwar line of washing machines and ranges. Like hardware, the 711 Stoves and Ranges category shows relatively few shipments/destinations from CT to GA (200), IL (100), and TN (100). (Washing machines are part of a very large category). The article also mentions that they have 8 distribution centers around the country. I haven't been able to identify where those were, but based on the waybill data I'm guessing three are in GA, IL, and TN.
A major clue comes from another source. Some time ago I acquired a book of shipping orders from Norwich, NY on the O&W. This is all of the traffic handled by the freight agent in July, 1952. This book is string-bound, with paper glued over the binding so I can't remove the pages from the book. At least I haven't yet. 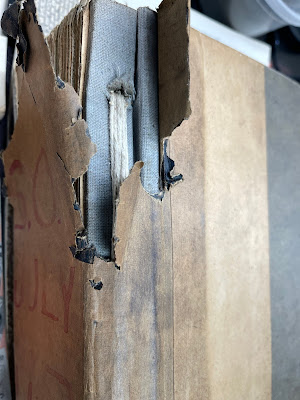 Of particular interest are the orders for several companies, who ship nearly daily. For example, the Norwich Pharmacal Co. On a given day, there is a stack of shipping orders to multiple destinations. For example, the NPCo shipments for July 1 were 43 pages. But these are small shipments, several boxes of drugs for each. Clearly this isn't 43 carloads.
The orders for Craine, Inc., for hardware, however provided clarity. Because these shipping orders include the car number.
Looking at July 10, there's a complete picture of how the railroad handles shipments from an industry like Craine, Inc. 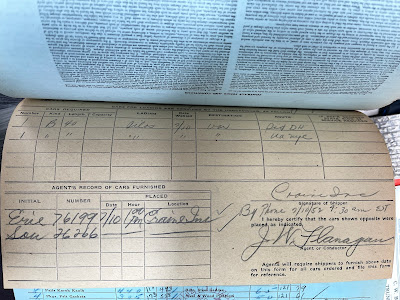 This is an empty car request form. I have not located one for the New Haven yet. There are several in this book. We can see that two cars were ordered by Craine, Inc by phone on 7/10/52 at 9:30 A.M. and two cars, ERIE 76199 and SOU 26266, were furnished at 1:00 P.M.
Since they ordered empties, I believe they had their own industry track. Bordens also had empty car orders.
Note what it says in the Destination field - var - as in "various." Each of these cars has 8 orders (and would have matching waybills), because each had 7-8 destinations. Even better, it shows the route:
ERIE 76199
I find all of these in the Official List of Prepay and Open Stations except Warsaw, which is listed on the B&O and ERIE, not LV. I'm sure all of these are freight house stops, especially Gasport since there are two different people listed in the Notify field.
Here's a map. Of course, it's following roads instead of the railroad, but it gives you an idea of how widely this car traveled. 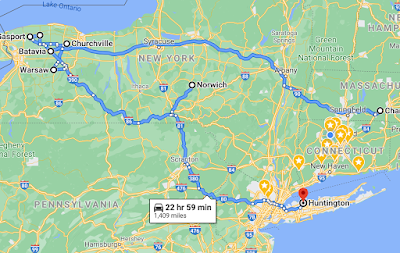 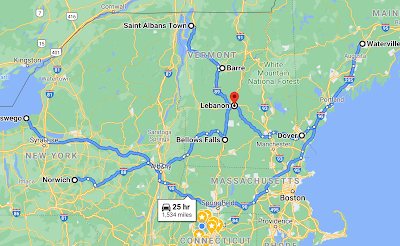 Also note that the Agent did not follow the car loading rules when furnishing the Southern car to be routed to the northeast. I also find it interesting that there isn't a linear route among these locations.
Since the 1% Waybill Analyses only cover carloads, these sort of shipments are excluded. It's very useful in identifying the movement of commodities, but it's only part of the picture. I think it's safe to say that Stanley and/or American Hardware Corp (Russwin, Corbin Screw) had distribution centers in AZ, CA, IL, NY, and OH. But I also suspect that a large number of the cars were for multiple destinations just like what we see with Craine, Norwich Pharmacal, and several smaller shippers in the O&W book.
We have to remember that these studies were published for the government, railroads, and companies who had many other resources on hand, and were also actively involved in their industry. Each would have been utilizing the data for their own business purposes, rather than trying to backwards engineer the movement of freight by rail like we are, some 70 years after the fact. So it takes a little detective work and guesses.
But the goal isn't necessarily a full understanding of these movements either. As I've noted before, most of this information is relevant for use on model waybills, and the primary purpose of those is as "scenery" to enhance the immersion in the operating experience. All of the data I've been working through, commodity information, routing guides, etc., will help build trains that look different depending on the interchange of their origin, allows the agent/conductors to know which train is appropriate for an outbound car, and enhance the illusion that we are operating a real railroad.
Here are the shipping orders for the two cars above in the order they appear in the book. Enjoy! 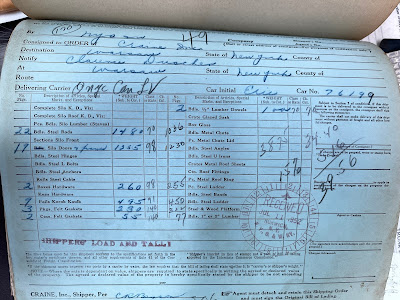 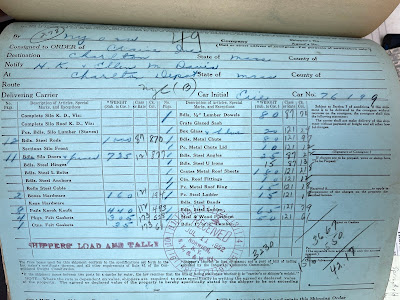 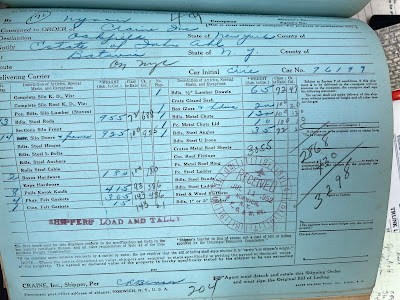 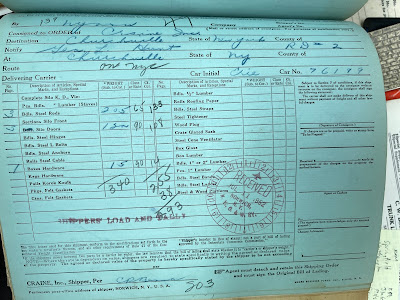 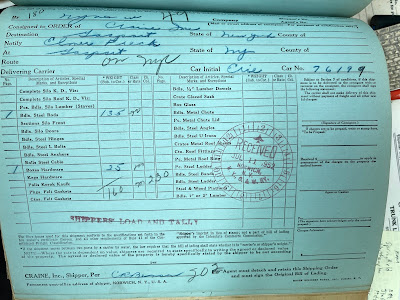 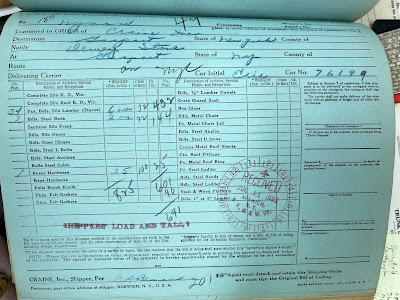 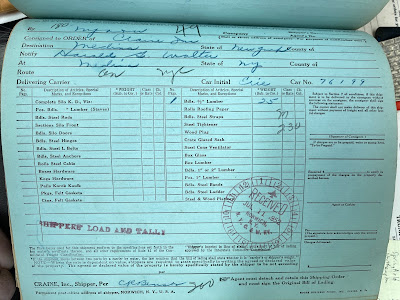 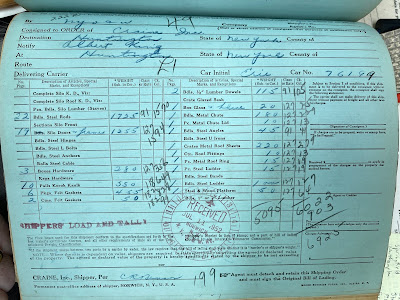 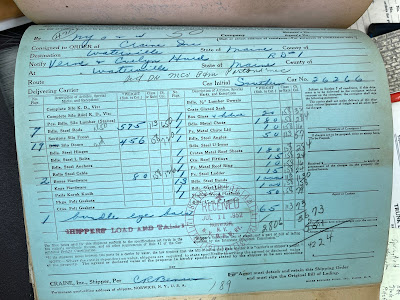 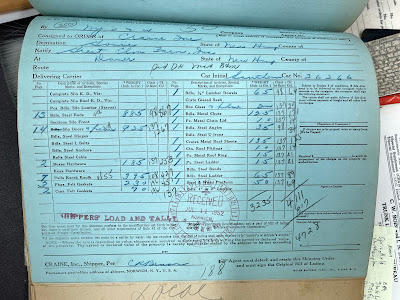 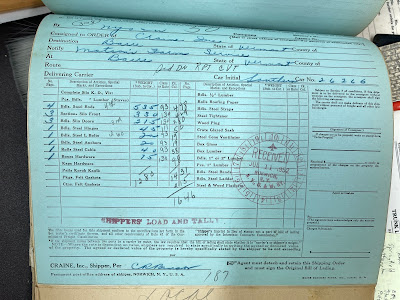 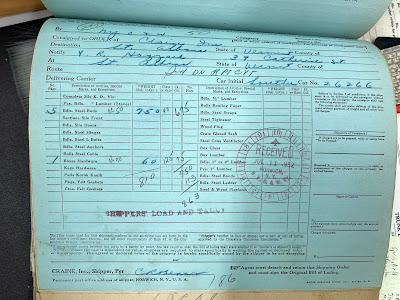 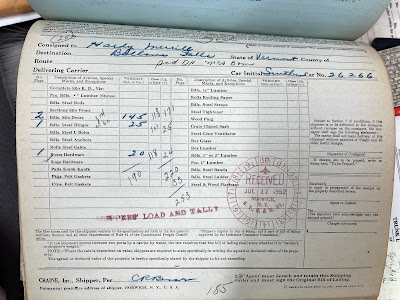 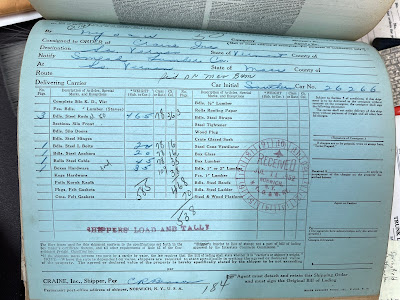 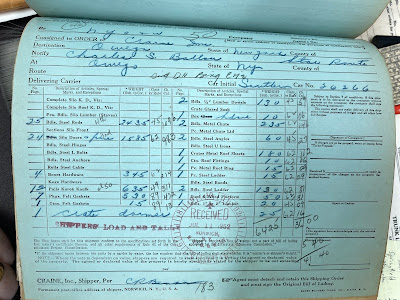 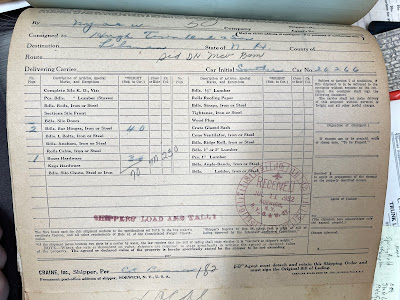