Commodities are interesting, but don't necessarily have a direct impact on the operation of the railroad. Indeed, in real railroading, unless a specific car is requested by a customer, or special handling is required, the crews probably don't care what's in them.

Routing, on the other hand, can have an impact on operations. Particularly when considering the mix of cars for a train.

For example, Erie has a direct interchange to the New Haven in Maybrook NY.  So one would expect that cars loaded on the Erie would come via Maybrook. Would they come via other interchange points too?

Routing wasn't as complex a process as it might seem, but it did involve more work pre-computer era. While shippers could specify the route they wanted, I think that most of the time the Agent selected the route. To do that, they used Routing Guides. I have several of these guides, but far from a complete collection. Of course, an Agent only needed the guide that applied to shipments from their station. I want them to determine routes for inbound and outbound cars, so I've been trying to dig them up for as many roads as I can.

The basic process for the Agent is to look up the destination in the Routing Guide, and it would list one or more routes to that destination. The Agent would select one, and notate the entire route on the waybill. This would serve as the routing instructions for conductors and yardmasters along the way.

This was sparked in part to some recent questions in multiple forums online asking about smaller interchanges on the New Haven. The routing of cars was very well considered when developing these routes, and for this example I'll look at shipments from the Erie to four locations on the NH::

Each station is assigned a number. Various publications by each railroad, along with national publications, use these numbers.

For example, the New Haven Official List of Stations: 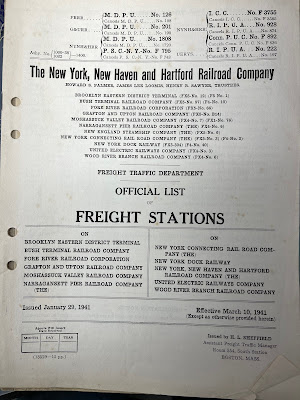 A national periodical, published annually with periodic supplements, is the Official Open and Prepay Station List, which covers all of North America: 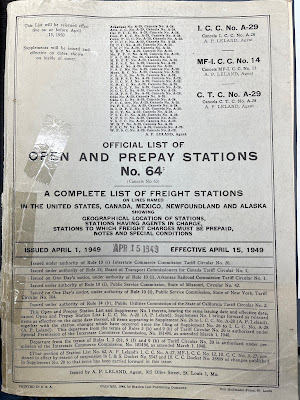 The same station numbers are used in the Routing Guides, like the Erie, C&O (PM) and B&M ones I'm referencing today. Here's the Erie one: 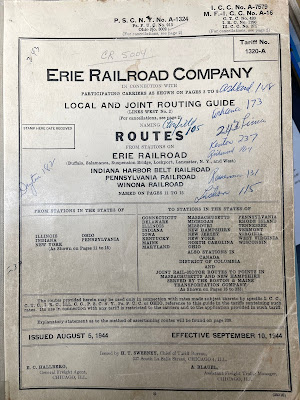 I've chosen the stations above because there are several interchange points north of Plainville on the Canal Line, and I also want to narrow down what won't come through New Britain to those destinations.

According to a NH Freight Interchange Map from 1929, the annual volume at these points in 1928 were:

It appears that in 1925 and 1926 a significant amount of the traffic was shifted from Northampton to Springfield.

This corresponds to changes in the freight schedules as well. In 1925 NS-4/SN-1 was a through freight that connected at Northampton and Springfield. What's not clear is how it worked both, but here's a note from SN-1:

"...Fills out at Springfield with freight for New Haven and beyond..."

By 1927 this is no longer the case, with those trains only running to/from Springfield. It would have to go down the Canal Line, over the Highland from Plainville to Newington, then take the Springfield Line through Hartford north to Springfield, unless they had trackage rights over the B&M from Northampton to Springfield. Neither as simple or efficient as moving the bulk of the interchange traffic to Springfield.

I'll start with the Erie. This is about an 800-page book from 1944 with routes from Lines West (Illinois, Indiana, New York, Ohio and Pennsylvania). It also covers some originating points on the Indiana Harbor Belt, Pennsy, and Winona Railroads. Lots of destinations are included, I just make sure Connecticut is included before I buy one of these Routing Guides.

Because we know the four station numbers, we can just go to the pages that specify destinations on the New Haven.

Let's look at the ones they all have in common first:

Simple, and expected. Anything loaded on the Erie can be routed over the Erie to Maybrook, NY to be interchanged with the NH.

From certain originating points, the Erie interchanges with the D&H at Carbondale, PA, and then the car will come back to the Erie in Scranton, PA before reaching the New Haven at Maybrook.

So where do they differ? These are routes that go to Plainville or New Britain, but not Simsbury or Holyoke.

This is interesting because it notes the different districts or divisions it will run on the NYC, the Eastern, Western, and then NYC (B), which is the B&A District.

All of these go through Springfield, MA on either the B&A or B&M. Why wouldn't these be used for cars to Holyoke?

Because both the B&A and B&M have interchanges with the NH that are closer to Holyoke. These are their alternate routes:

Route number 2 is interesting because it goes to Northampton instead of directly to Holyoke. We'll see this is consistent with a B&M Routing Guide in a moment. This would lead one to believe that at least by 1944, interchange with the NH in Holyoke had been reduced to nearly nothing.

So routes to Holyoke and any of the towns on the Canal Line north of Plainville could come via Maybrook via the Erie, Northampton via B&M, or Westfield via B&A.

There are also some interesting routes possible:

As you can see, this specifies that the route is used only for specific commodities.

These three route are quite interesting indeed. It appears that this is routing cars to Baltimore where they will be transloaded into M&M Trucking Company trailers, and then routed on flat cars from the B&O to Providence on the NH.

Update: I was incorrect in this theory, see Jeff Ward's comment below.

Mike Clements had sent me the following info as well and I hadn't updated the page yet:

This is all great stuff guys, keep it coming!

But for my purposes, routing via the Erie consists of:

The Northampton and Westfield routes are interesting, but not terribly useful for my layout.

So the answer is that yes, most Erie cars will probably come through Maybrook as expected.

But cars loaded on the Erie and bound for New Britain, Plainville, or the New Hartford Line can also come via Springfield. But we probably wouldn't see Erie loaded cars for points north of Plainville coming on HDX-5 to be dropped in Plainville for the NY/YN freights.

The different routes apply depending on the location loaded. So as I identify off-line industries,

If we know the originating station, then we can go a step further which may narrow down the route even more. For now, though, we'll just stick with all possible routes.

The B&M book is from 1955, and includes loads originating on quite a few lines besides the B&M, including BAR, Bar&C, B&ML, MEC, PF&N, and StJ&LC.

The B&M routings are much simpler:

The B&M book also includes traffic from BAR, and it's different:

The B&M book also includes traffic from MEC, and it's different again:

Again, interesting information. Loads from BAR and some of the MEC loads will be coming up the NY freights instead of via Hartford. I believe the differences in these routes were (at least in part) for balancing traffic.

A Vermont shortline that highlights some of the other connections the B&M has:

For all four destinations:

This is another shortline in Vermont. All routes go through Wells River, VT (spelled differently than the SJ&LC page...) to the B&M and then either Northampton or Springfield as expected.

The Belfast & Moosehead Lake, Passamaquoddy Ferry and Navigation, and Seaport Navigation are listed as notes that all route through the MEC at:

I have a 1944 Routing Guide from the Pere Marquette as an example. As one might expect, there are more potential routes to get to the New Haven.

These routes are valid for all four destinations, except #13 which is not listed for any location except New Britain. There are also several notations for clarification:

There are also 4 Notes:

Note 4 - When on account of clearances, shipments cannot be handled via Greenville Piers or Jersey City, NJ routes, such shipments may be routed via PRR, Belvidiere, NJ, L&H, Maybrook NY, NH.

Do you need the Routing Guides? Not necessarily. With the freight schedules, we know that traffic to New Britain comes from certain trains, from Maybrook, Cedar Hill, or Hartford.

We know that traffic via Hartford will come via Springfield or Maybrook (for the New Hartford local, but not New Britain). We know which roads interchange at Maybrook, and Cedar Hill rounds up the traffic from Greenville, Fresh Pond, Harlem River, and New London (and Maybrook when the OA/AO trains aren't running).

But the routes clarify that traffic to the Springfield Line west is unlikely to come via a Boston>Cedar Hill train. We can also see that traffic to the Canal Line north of Plainville will receive cars from NYC (B&A) and B&M via Northampton and won't be part of the NY/YN traffic.

Some routes seem obvious - traffic from the northeast is coming through Springfield or Northampton, and occasionally via New London. But I didn't expect the routing via Worcester, for example. It makes sense, though, because it reduces the volume of traffic through Boston.

Coming from the West it's little surprise that a road with a direct connection like the Erie will handle most of the traffic to that interchange. But traffic from farther north can flow via other roads to Springfield and Northampton.

It's also not surprising that once you get to an indirect connection that there are more potential routes via a carrier that interchanges with the NH. Remember that a few routes will go via Canada. One example, loads of automobiles may be coming through Springfield on the B&M instead of via Maybrook carriers. It's easy to think that Maybrook or the Greenville/Jersey City floats are only routes from out west, and that's not the case.

I find the routings interesting by themselves. But they are also useful in building train consists, leading to a visible difference in the mix of freight cars on the different trains. This will be particularly evident in the through cars to the Canal Line north of Plainville on the NY/YN trains, since they will contain fewer cars from New England roads.