Feeders and Exploring DCC for the I-2s

I've been working on one of my least favorite parts of the hobby - feeders. It's really not that bad, especially once I get started. I just have a lot of them to do. I've done about 15 pairs by the time I took this photo. Another 16 pair or so to go in Whiting St. Then I still have the Berlin Line, some in staging, the east side of town and the west side including Stanley Works. Yep, lots of feeders to go.

I have also made more progress on building the new website.

In addition to making progress on what I should be doing, I also had my Crown Custom I-2s sitting at my desk, and started planning how I'll install DCC, sound and weight. I have an opportunity to get a couple that have already been weighted and upgraded to DCC. I'd have to sell mine, and hope that I cover most of the cost of picking those up.

Another potential factor is I have different goals that I'm trying to accomplish with my installations, and those wouldn't be set up the way I'd like. They would work great, of course, I'm just looking to do something a little different. 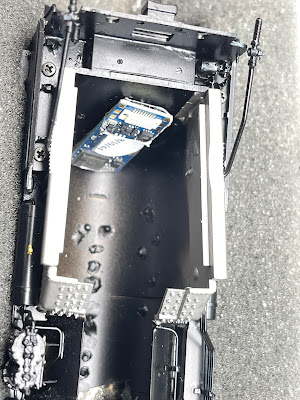 An ESU micro (or a Soundtraxx Tsunami Micro) will fit behind the motor. Both have a Next18 18-pin connector. This means I can do all of the wiring first, and the decoder is removable if I ever need to replace it. As a result, I plan on using these pretty much exclusively, even if the larger version would fit.

Chris prefers the Tsunami decoders for steam. Since he's fired real steam locomotives and understands the most minute details about operating a steam locomotive, I trust his judgement.  I checked and (as expected, due to NMRA standards) the pin-outs are the same, so by installing that wire harness, I can use either decoder.

Why not put it into the tender? Because if the decoder is in the locomotive, I only need to run two wires to the tender (for the reverse light). The power from the tender comes via the drawbar. In my era the lights weren't used during the day, so I don't even have to do that if I don't want to. 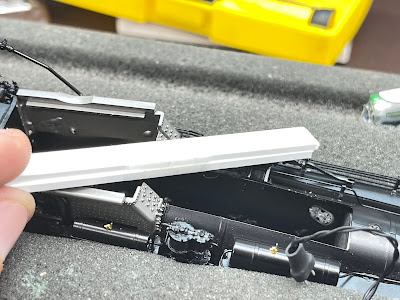 There's also space above the motor. Of course, I can't see inside it to tell, but a rough measurement tells me that there's quite a bit. As a test I put two layers of .080" styrene the length of the open section inside and the chassis installed without any issues. So there's room to add quite a bit of weight. I'll need that since these will have to haul as many as 5 passenger cars up the helix. 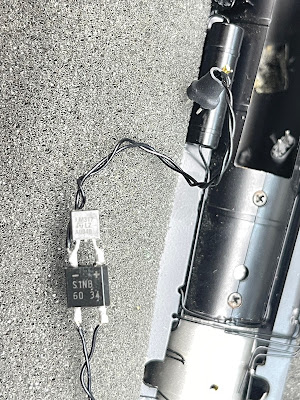 There are two electronic components (I removed the shrinkwrap) that go to the headlight. I haven't opened the tender to see if there's a similar one to the reverse light. One is a diode/bridge rectifier. I can't find it by searching for the markings on the internet, but I suspect they are for helping to protect the lights and maintain better continuity on DC. They won't be necessary if I replace the lights with LEDs, but I will need to fit in resistors. That won't be difficult, though, there's plenty of space. 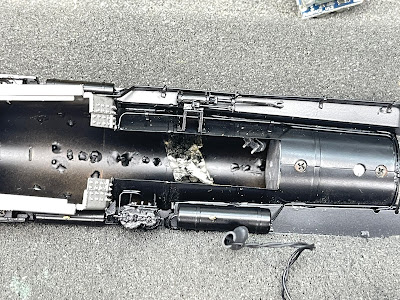 I do, however, like the small plugs used for the lights. In this case there's one in the boiler and there's a second one in the smokebox. This allows you to remove the smokebox cover and unplug the light, and the same thing when removing the boiler from the chassis. I may very well consider similar connectors for other installations.
There's also space for the speaker in the front, here's an example of an I-2 that Tony's Trains did with the speaker in the smokebox. In this case there's also a speaker in the tender. I'll consider that, although I may try with the single speaker first, since adding the second one requires more wires to the tender.

I'm on the fence for adding a keep-alive. It's a decent size locomotive with a long wheelbase. It also only has to come from staging, make a station stop, and return to staging. So it's not going to get a whole lot of activity where it is necessary. On the other hand, I kind of want to use them on all locomotives as a general standard. I'll probably order a Tsunami Micro and Soundtraxx Current-Keeper to see how they (especially the Current-Keeper) will fit. Of course, there's plenty of room in the tender if I want to run additional wires there.

By now you're probably wondering why I keep mentioning that. It's primarily about appearance. It's not all that difficult to do, although there's the question of whether the wires are "permanent" or have a connector so you can still disconnect the tender. My goal is to try to make the wires look like the water lines. I'm even considering removing part of the existing lines and replacing them entirely with the wiring between the locomotive and tender. It is possible to get wire with multiple internal conductors, so I could have 4 or even 6 wires going to the tender that still look like two wires/hoses. However, with more wires, it will be harder to hide the connectors if I decide to do a removable option.

If I replace the wire hoses, I will lose some detail (there's a valve on the line), although I have been looking for something similar that is cored to receive wire (primarily at Precision Scale) and hoping I can make that hole large enough to accommodate whatever wire I'm using. I also need to find a way to stiffen the wire for most of the run, but have enough flexibility for curves.

Email ThisBlogThis!Share to TwitterShare to FacebookShare to Pinterest
Labels: DCC, I-2, Layout construction