I'm continuing to work on the new version of the website. Here's what I was working on tonight... 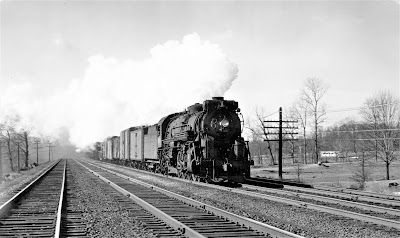 R-1-b 3335 eastbound with EA-2 at Newington Junction. Cochrane
The Speed Witch was one of the highest priority freights on the New Haven, consisting primarily of less-than-carload (L.C.L.) traffic bound for the Pennsylvania Railroad via Bay Ridge. This was an advertised service, overnight to Philadelphia from just about any point on the New Haven.
The Speed Witch itself (NE-1) was a Boston to Bay Ridge train, NE-2 was a reverse move from Bay Ridge, but only to Cedar Hill. In busy years, such as 1947, there was a First NE-1 (1/NE-1) from Boston, and a Second NE-1 (2/NE-1) from Bridgeport.
ANE-1 was a Hartford to Bridgeport leg of the Speed Witch, connecting to NE-1 at Bridgeport. EA-2 was the reverse of the schedule, although it didn't have the prestige of the Speed Witch.
ANE-1 was regularly hauled by R-1-b class No. 3335 until the train was eliminated. It appears this was by January 31, 1949. A supplement for the Arranged Freight Train Service with that date has an update for YN-1 indicating that it protects the closing for L.C.L at the freight house in New Britain at 5.45 pm, and establishes connections with NE-1 at Cedar Hill. Prior to that date, the freight house traffic was loaded on ANE-1.
I don't have any evidence that this train ran with other motive power, but No. 3335 was condemned on November 9, 1948. The April, 1948 Arranged Freight Service book only has tonnage ratings for an R-1-b, even though many other runs list ratings for diesels and steam. NE-1 is rated for DER-1 (DL-109) class locomotives. If ANE-1 ran from November 1948 to January 1949, it may have used a different R-1-b class locomotive, or a pair of DER-1 locomotives. DER-2 (FA-1/FB-1) locomotives could also have been used, although I don't know if they could have kept the schedule. It may have also been annulled in November, 1948.
I had the Key brass model. They released a version with Southern valve gear, which is appropriate for this locomotive. The Key model came with a Vanderbilt tender, although the initial release was wrong. Apparently they produced the correct tender, although I don't know if original purchasers simply received one, or if they had to purchase one. However, 3335 had the USRA tender (from one of the original 10 R-1s), so I found a brass tender produced by Sunset to replace the Vandy tender (which I gave to Dick since he had the version with the wrong Vandy tender).
However, both ANE-1 and EA-2 run outside of my op session window. So I decided to sell it, and it went to modeling buddy Bill Chapin who is modeling the Highland Line (among others) and now has the correct R-1-b for these trains.
Posted by Randy at 8:28 PM