I generally have two different layout work tracks going at a given time. The first is the stuff that I really need to get done. Things like the lights, feeders, some additional trackwork, etc. A lot of these projects are things that aren't always high on my list of, "things I like to do."

The second track are the things that I do find interesting, at least at a given moment in time.

I try to make sure I make some progress in the first category several times a week. But for those times where time is short, or I'm tired (especially mentally), I try to just make sure I get down to the basement and find something of interest to work on.

The progress I've made in the basement with the lighting, paneling, and organization has helped a lot with that. It makes it a fun place to be, and I generally do a lot of other work down there as well. The more I'm in the basement, the more likely I'll make progress on something.

Tonight was one of those nights. I was tired, didn't really feel like doing anything, but I had something interesting sitting on the bench.

The KV Models handrail stanchions I got for the S-1s. But as I looked at how they need to be installed, I decided it would make more sense to get a proper bending tool. 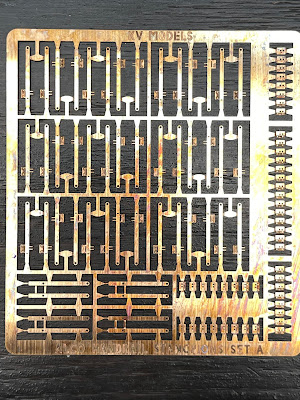 So now I'm sitting at my desk/workbench, looking around the room and, when leaning back, the ceiling (because the lights are still very cool). But I still need to finish the (really annoying) job of fitting the (really annoying) fiberglass ceiling tiles that were left. If they hadn't used these tiles when our house was built, I would have used different ones. But they're already here.

Originally I thought I would need to pick up quite a few new tiles for the Whiting St. Yard, but since I installed so many lights, I had a bunch of spare ones. So I might as well get working on those.

As it turned out, I was two tiles short. I didn't even need two full tiles, but I needed big enough chunks of each that I couldn't get what I needed out of one tile. Home Depot didn't carry them, of course, and the closest Lowe's that had them in stock was about 45 minutes away.

Didn't matter, I was going to finish this tonight. 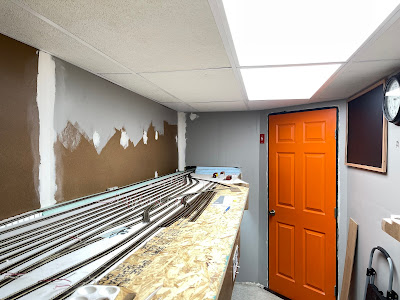 The last pieces were the far side of the ceiling over Whiting St. Yard. The great part is that the ceiling is one of those projects that only needs to be completed once.
Posted by Randy at 10:08 PM