I was poking around looking for a colorized picture I had seen a while ago for a truck from Middle Atlantic Transportation Co. Because of the name of the company, I've always had trouble finding them, and I thought I had downloaded it, but couldn't find it.

Imagine my surprise when I stumbled across this at Getty Images.

The company was headquartered in New Britain, near Wooster St, and photographed by William C Shrout in a series of pictures taken in 1942 for Life magazine. I don't believe they were ever published. Not all of the photos were taken in New Britain. 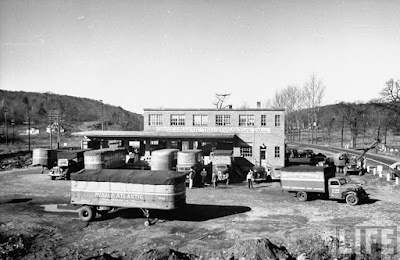 I don't think they were served by the railroad, as they were a competitor, shipping freight between New Britain (Hartford), New York, Cleveland, and Detroit. But I'm working on getting decals produced so I can have a truck on the layout somewhere since it's a local company. The video is the first color image or video I have found from the era. Based on the video I'll be using a 32' Fruehauf Aerovan trailer from Wiseman Model Services, and a Sylvan 1948-53 C6100 2-ton tractor. These look like exact matches.

Unfortunately the terminal is located off the layout, otherwise I would do several different trucks.

In the process of searching for that, I found another set of unrelated (but interesting) videos.

This is a series of newsreels that was also apparently never released. It shows how the Landers, Frary & Clark Coffeematic Pot is produced. While interesting in and of itself, what's most useful to me is to learn that the pot was made of copper, and also copper-, nickel-, and chrome-plated. These, of course, are commodities that I'll need to have shipped to the plant.