Another question that comes up frequently on Facebook and other groups is, "what code rail should I use?"

Well, I probably couldn't get a better picture than this to show why you might want to consider different code rail on your layout: 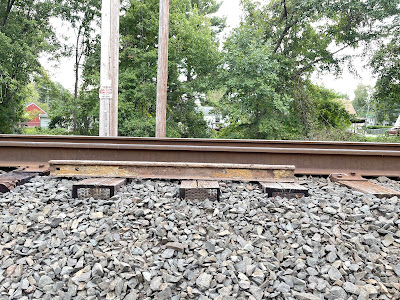 The new rail is 131 lb., and the old rail is so worn I haven't been able to find any markings. It is the smallest rail that I think I've ever found. How can I figure out what size rail it is?
Measure it. 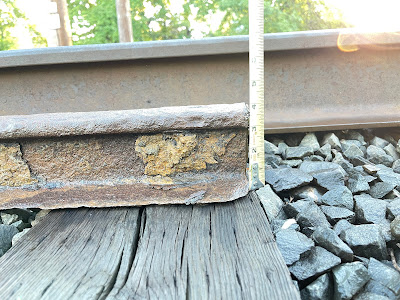 It's 4" tall. I happen to have several original NH documents regarding rail dimensions. 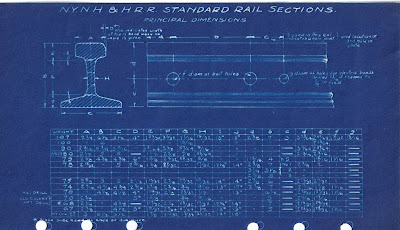 This page isn't dated but doesn't have any rail that's only 4" tall. 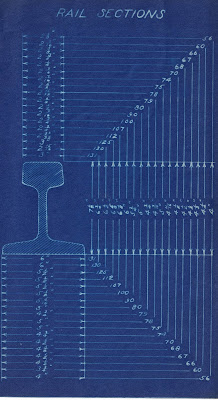 This one did, though. It's 56 lb. rail. There's another page that's a fold-out and too large for my scanner, but it confirms the dimensions. Even better, it lists all of the standard rail dimensions, and notes which ones the NH used: 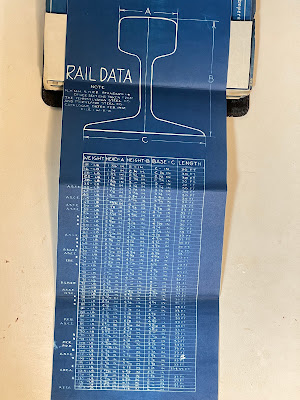 Once again, we find that the 4" rail is 56 lb. Here are a couple of additional pages from the book regarding rail: 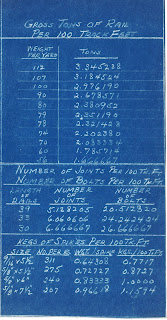 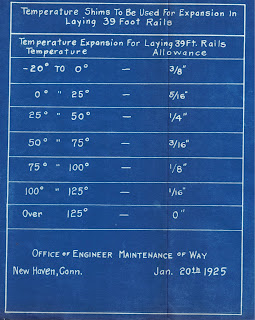 How does this apply to our modeling?

Conventional modeling wisdom is to use Code 83 for main tracks, and Code 70 for sidings and yards, and occasionally with Code 55 for light industry tracks. The fact is, for many modelers it should be Code 70 and lighter.

There are many sources that relate the two, a common one I see (such as this one) is:

But the NMRA data shows it's a bit more complicated:

Railway Prototype Cyclopedia 5 has a chart detailing several brands of rail, in various scales, which fills in some holes. I use Microengineering track/rail, which is:

Based on the common designation of Code 100 = 155 lb, it's often noted that the only use of such heavy rail was the PRR on a relatively short section of their heaviest mainlines. This isn't quite true. As it turns out, 155 lb. rail is noted on a NH Rail Weight Diagram (updated through November 9, 1954) in a very short segment on the westbound main track just west of Saybrook. I believe it was also used on the P&LE in at least one segment. Regardless, it's not widely used. 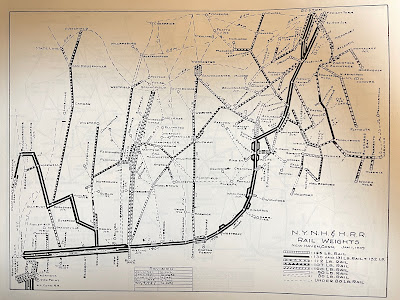 The rest of the rail on the westbound main track from Boston to Woodlawn is 130 lb. or 132 lb. rail. Some sections of the eastbound main are 140 lb. rail, much of it welded.

If you look at the diagram, the only other major section on the entire New Haven Railroad with 130/132 lb. rail through 1954 is Middleboro to Matfield, MA. The Springfield main track is 112 lb. rail (along with Groton to Norwich), with all of the rest of the rail on the New Haven 107 lb. or lighter. The Berkshire Line, Highland Line, Most of the Norwich & Worcester, parts of the Air Line, Midland Line, and the Canal Line north of Plainville are all this weight rail.

Branch lines, like the New Hartford, Griffins, Suffield, and even the Valley Line are under 80 lb. rail. An earlier map reveals these to be primarily 78, 79 and 80 lb. rail.

So unless you're modeling the Shoreline, Maybrook Line, or Springfield Line, your New Haven layout should be Code 70 or even Code 55 for the main tracks.

There are far more prototypical rail weights than available codes of model rail, because it's not practical to manufature all of them. Here's how I would cover the range of rail weights:

Another way to think of it is heavy, medium, light, and extra light rail.

So yes, Code 83 for heavily trafficked main tracks. Otherwise, Code 70 for main tracks, and Code 55 for others. While this covers only the NH, I suspect it holds true for a lot of other railroads through the '50s (at least).

That's a pretty close match in my opinion.

Really? Code 70 for most model railroads? Yes, at least pre-1970, and probably much later too.
The NMRA has a chart at the bottom of RP-15 - Rail that compiles prototype usage of different weights of rail from 1940 to 1960. What I find very interesting is that in 1960 only 25.66% of rail in use on Class I railroads was 120 lbs or heavier.
That is, in 1960, only 25% of rail in use was the equivalent of Code 83.
The rest would be the equivalent of Code 70 (52%) or less; ~20% would be Code 55, and the remainder even lighter, or Code 40.
I don't have percentages for eras later than 1960, but as you can see the adoption of heavier rail was fairly slow. Part of that is because the heavier rail is primarily installed on heavily used main tracks. A lot of the time that old rail that doesn't meet the standards for heavy main track use can still be used on branch and lighter used lines. So the rail gets reused, and the oldest rail slowly gets replaced.

What about more modern modelers? I don't have a lot of info, of course, except for what I've seen around here. Over on the ex-Highland Line and the Canal Line (in Plainville) it is still predominantly ex-NH 107 lb rail (Code 70). But it can vary.

The CNZR has slowly upgraded portions of the track over the years. They get rail from other roads in the state. From what I understand, since the state owns the railroad, when rail is taken out someplace else, such as the Springfield mainline, it has to be made available for the smaller railroads. A freight-only line with low speeds doesn't need the same weight of rail as a high-speed main track. In a few hundred feet I found rail in use from as early as 1908, and up to 140 lb. welded rail. Compromise joint bars must be used between sections of different size rail, and in some cases, there are very short sections of a given size simply because they need to use multiple size compromise bars to get from a very small weight rail to a much heavier size. In a lot of cases I could barely read the old markings, but the first one is the standard NH 107 lb. rail that is still common throughout CT. 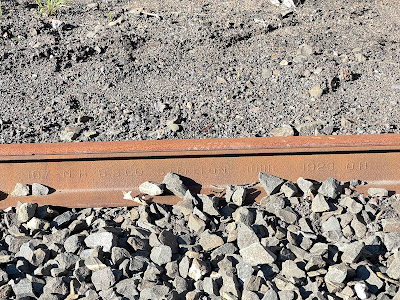 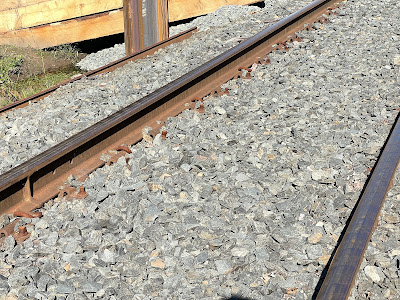 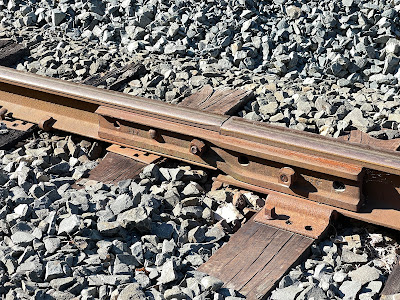 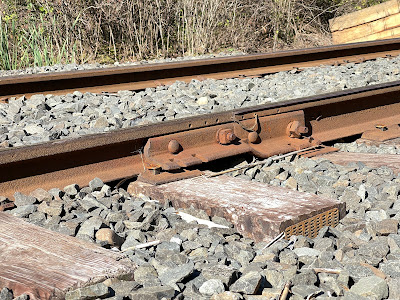 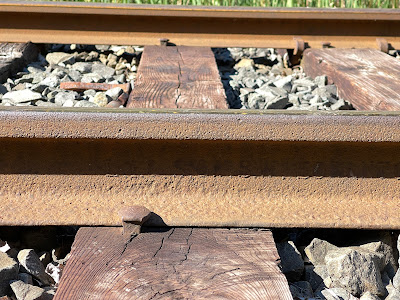 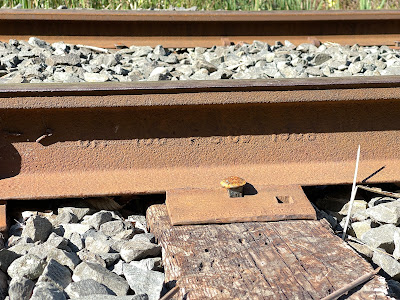 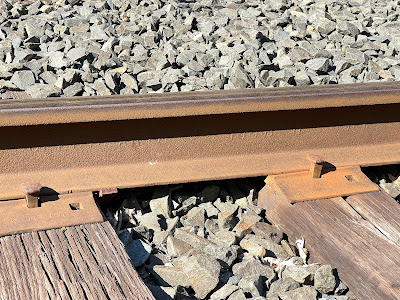 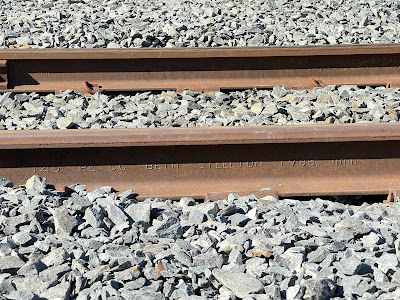 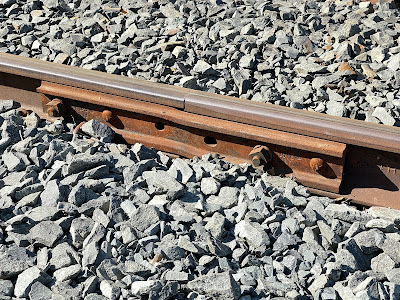 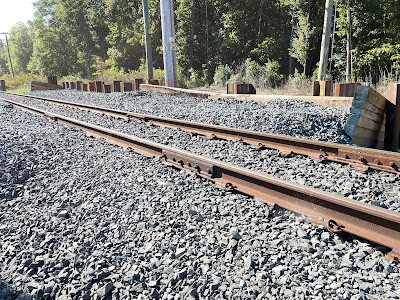 This sort of detail may seem very particular, but it is noticeable, especially in photographs. Since photos of our models turn them into 1:1 scale, and most people are likely to see your modeling in photos than in person, little details like these can become more important.

The code of rail doesn't have anything to do with reliability or ease of use. Wheels interface with the rail the exact same way regardless of what code the rail is. Code 100 isn't easier to work with, more durable, less prone to derailments, less susceptible to poor track installation, etc., or any of the many other comments you may see.

The only exception are models that don't have RP-25 flanges may bottom out on the spikes (especially oversized spikes, molded or otherwise). You may find these on older (early '60s and before), or European models (which are often actually 00 scale), through the '80s. But fixing this is as simple as changing out the wheelsets. This is possible even with locomotives.

The reason there is no difference in use is simply because the only thing that matters is how the wheel rides on the rail head. The wheel primarily contacts the inner railhead, although model wheel treads aren't always cone-shaped like the prototype so sometimes they ride more on the railhead itself. The only difference is how tall the rail is, but that's irrelevant mechanically, unless the wheels have oversized flanges.

Electrically, smaller rail does have a higher degree of voltage drop, for the same reason that a thinner wire does. However, they conduct electricity to the wheelsets in exactly the same way. Sufficient feeders are recommended for redundancy anyway.

Code 55 or less is more flexible. If you compare it to Code 100 you'll see why. It's much lighter rail. But the mechanical operation is the same.

I'd recommend doing a little research, and you may be surprised and find that even Code 83 is larger than you need. I also found Microengineering Code 70 was less expensive than Atlas Code 100 when building my layout. I do wish I had used more Code 55 for industry tracks, but in photos it appears the yard tracks may be the same size rail as the main tracks.