Power for the New Hartford Local

Chris has gotten started on building his undecorated Proto 2000 S-1 for a New Haven DEY-3 class switcher. I had started some modifications on mine a while ago, and we need to add decoders as well. So naturally, I pulled mine out to provide some input. Which has led to the locomotives hitting the bench for some more work.

So what locomotives will I need?

In my case, I need the S-1 for the New Hartford Local. Although I usually refer to this as HDX-5, it's a bit more complicated than that as things were changing throughout the era I model. For now I've decided to focus on 1949 and later since it will be easier to get the diesels running. Especially since HDX-5 used a K-1-d mogul with Southern valve gear, a variation that NERS never released (despite the initial announcement that they would). So until I'm comfortable I have the skills to modify the valve gear on a brass model I'll start with these.

HDX-5 was briefly eliminated in early 1949 when the K-1-d was pulled, and the tonnage absorbed into NY-4 which would work the New Hartford branch on Monday, Wednesday and Friday.

Presumably there was enough traffic, perhaps combined with the fact that HDX-5 originated in Hartford instead of Cedar Hill, and it was reinstated by September, 1949 with DEY-3 (S-1) no. 0967 assigned. It was built on May 13, 1944. 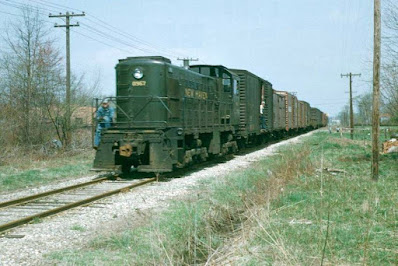 John Wallace took this photo of  0967 on the Valley Local in Wethersfield in May, 1949.

John's photo shows that the locomotive was still in it's delivery scheme in early 1949, and records confirm it wasn't repainted until April 3, 1952. So for my purposes it's still Pullman Green.
In 1952 it would have received the current (as of May 9, 1950) scheme of a Pullman Green cab and hood top, with a narrow band of Pullman Green and the curved fillet at the base of the hood, and the remainder of the hood in Warm Orange. This was the third scheme that the DEY-3 and DEY-5 (S-2) locomotives wore.
Later on, it was one of a few of S-1s that received the August 2, 1957-March 24, 1958 Matter/McGinnis scheme with black sides on the walkway. It was one of a few that had a small "NH" on the front of the hood. I haven't identified any other schemes worn by this locomotive, so the third scheme it wore may have been its final one. It survived to the Penn Central era.

Chris found this undated photo of 0994 in Wethersfield. Looking closely, you can see the line between the green hood top and Warm Orange hood. The question is, which green?

In mid-'51 the NH started the Pullman Green/Warm Orange scheme that 0967 received in 1952. But in a document dated January 27, 1955, no. 0994 hadn't been repainted yet. At that time, the current scheme was 401 Green with Warm Orange, and a 90 degree fillet had been added at the top next to the cab. In other words, the "full balloon" or "hot dog" scheme. This scheme was replaced by the first Matter/McGinnis scheme on February 1, 1956. So it must have been the "full balloon" scheme.

Sure enough, here's a photo confirming this scheme: 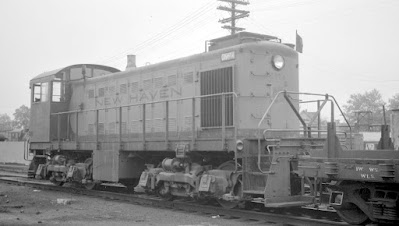 This was the fourth scheme worn by these classes. I haven't found any record or photo showing that 0994 was subsequently repainted prior to the PC era either. There are some photos of DEY- class locomotives in these (very worn) schemes in the late-'60s so it's possible that neither 0967 or 0994 were repainted again.

I don't have any engine assignments for 1951 so for now I will keep 0994 on that assignment.

In Spring of 1952 the New Hartford local and the Cedar Hill-Holyoke local were combined, operating out of Hartford. By September 1952 the New Hartford local is reinstated, now as NX-25 after the elimination of the Hartford Division. It still originates in Hartford, and has DERS-2b (RS-2) 0503 assigned. This is convenient, since it's one of the two locomotives regularly assigned to NY-4/YN-3 in earlier years and I've already modeled it.

I don't have any repaint information for 0503, but here's a shot in South Boston in another scheme: 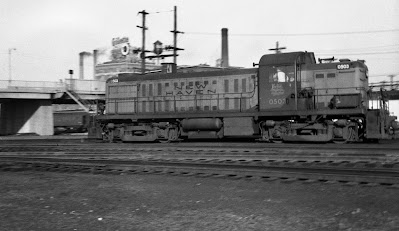 The diagram for the following "full balloon" scheme was dated for June, 1954, but it was noted as a correction, and photos indicate that the switch occurred earlier, probably mid-1953. So there's a possibility that 0503 would have the pictured scheme by late '52, but it could have been sometime in 1953 as well.

No 0967 is assigned to this train, but we know that 0967 was repainted in the above scheme on April 3, 1952 as noted above. But it doesn't work New Britain at all, which is one of the reasons there are no daytime freights in my November, 1953 ops sessions. This train, as NX-28, would switch back to originating in Hartford for fall of '54 and NY-4/YN-3 would also be reinstated by then. Tom McNamara caught DERS-3 (Fairbanks Morse H16-44) no. 590 on the job in that era.

All of these changes are beyond the operating sessions on the layout.

During this era, locomotive paint schemes were changing frequently, and those schemes help set the era. But not all of a given class received a particular scheme. Although I know 0967 was repainted by 1953, it doesn't look like it was operating in New Britain at that time.

As for 0503, that could have been repainted after November, 1952, the last year it will be running on the layout. At that time, there are a couple of DERS-2c (RS-3) locomotives, one of which will be in that scheme (and the other in one similar to the RS-2 delivery scheme, but Pullman Green and including a band of green along the bottom). So three different RS- paint schemes running at once if I stick with the delivery scheme on 0503. I do have a third model already disassembled, and I could do a second model if I wanted to. For the moment that will stay on the back burner unless/until I find documentation that it was repainted prior to November, 1952, and I'll get working on the S-1s instead.